It’s the morning after the first day of Denvention 3, the 66th World Science Fiction Convention. So far, so good!

We got into Denver on Tuesday and were able to register right away (once we found the convention: the Denver Convention Centre is one of the largest buildings I’ve ever been in and is capable of holding multiple conventions at once–which is why the first batch of people we saw wearing badges were SF fans at all, but statisticians here for there own convention. 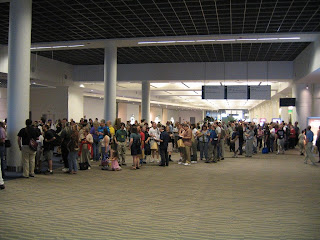 We scoped out the facilities, then went back to our hotel. The convention proper got underway Wednesday at 11:30 a.m. with the first panels, one of which was one I was on, “Reading Tolkien in the early years.” As we made our way there we were extremely happy we’d registered the day before: as you can see, the lines were looooong. 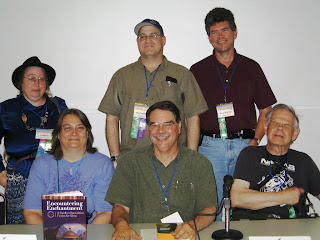 The Tolkien panel was a discussion of the earliest enthusiasm for Tolkien’s book and the fandom that grew out of it (with digressions into Tolkienalia in general). Those are our panel members at left: back row, left to right, Jo Walton (who moderated), David Louis Edelman, and me; front row, left to right, Susan Fichtelberg (displaying her book), Bruce Leonard and Ed Meskys. 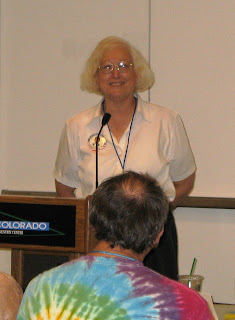 I spent most of the rest of the day checking out the dealer’s room and kind of wandering around trying to spot people I knew, with a side trip downthe street to see if my SLR, which suffered a malfuntion the night before, could be fixed (it couldn’t, not in the time we’ll be here…*sniff*). At 4 p.m., we went to hear Connie Willis read Robert A. Heinlein‘s 1941 WorldCon guest of honour speech, which was extremely interesting and actually holds up pretty well in a lot of ways. Connie, like most of us, considers herself a “child of Heinlein.” As she noted, you might think, reading him now, that he simply writes like everyone else: but in fact he invented the way most of us write science fiction. I think I need to go back and re-read The Moon is a Harsh Mistress… 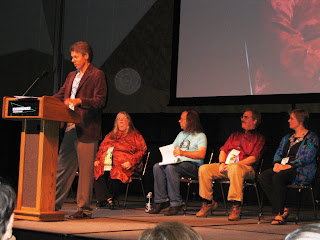 After that came the opening ceremonies. Here you see toastmaster Wil McCarthy introducing the other guests (left to right), music guest Kathy Mar, fan guest Tom Whitmore, artist guest Rick Sternbach and guest of honor Lois McMaster Bujold. (Heinlein, of course, being the Ghost of Honor, was there in spirit.)
Then we hooked up with some of the folks from Calgary (most of whom are involved in the planning for the World Fantasy Convention there in October) whom we know well, and had a fabulous dinner at Maggiano’s, an Italian restaurant. Among those who joined us was Lee Modesitt, Jr. .
Now on to day two. I’m moderating a panel this morning of authors reading their juvenilia, then I’m doing some signing (if anyone wants anything signed) and then at 4 p.m. DAW is announcing its upcoming titles. After that…we’ll see!
More later!
And all my Denvention photos will be posted here.

Permanent link to this article: https://edwardwillett.com/2008/08/denvention-day-1/