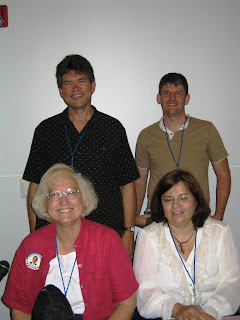 And so Day 2 has come and gone (at least for those of us for whom 11 p.m. is still a reasonable time to head to one’s hotel room). It was a good one for me. Things started off with a bang with the panel I mentioned a few days ago featuring writers reading their juvenilia. Besides myself, Connie Willis , Sarah Hoyt and (fellow DAW author) Joshua Palmatier were on hand. I think the audience had a hoot. We had seriously purple overwriting from Joshua, a fabulous bit of Route 66 fan fiction by Connie, plus a sample of her romantic-comedy confession story “I Called for Help on the CB but Got A Rapist Instead” (that’s close to the title, anyway) which was funnier than you’d think.

Sarah read a memorable sex scene from I believe the first story she sold, although she’s still waiting for the $15 payment. And I offered up a bit of The Golden Sword and, by popular request, the climax of The Slavers of Thok. Everyone thought that title was very funny. I can’t imagine why.

Those are the panel members in the first photo: me and Joshua in the back, Connie and Sarah in the front, and I apologize to Sarah–in both photos my wife took her eyes turned out to have been closed. But I wanted to be sure she was in there, anyway. 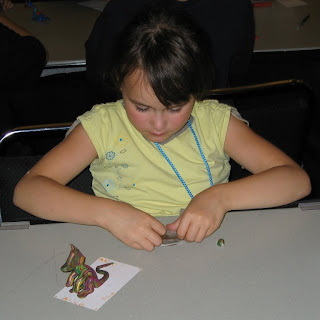 After that, it was off to sign up in the exhibit hall. I did sign a few copies of my books and a few copies of programs, par for the course for me, alas. I made sure to take my chance to go and say hi to John Scalzi, who was manning the SFWA booth while I was signing (I’ll be manning it myself on Saturday at 3 p.m., then signing at the SFWA table at 4 p.m.). It seemed the least I could do since I was dreaming about him a few days ago. I was also able to point him out to my daughter, who needed him for a treasure hunt they’ve been running daily as part of the children’s program. (Later she attended a very fun Make Your Own Little Dragon workshop, and did a fine job of it, as you can see.)
I also took the opportunity, shortly after my official signing, to sign all the stock of my books I could find in the Dealer’s Room.
Then I hung out with Alice while Margaret Anne attended a panel, and finally it was time to go down for the DAW upcoming books presentation. I met Sheila Gilbert and Betsy Wollheim for the first time, and a couple of other DAW authors; I also met John Helfers, who bought Lost in Translation for Five Star and thus started the ball rolling that led to me being a DAW author in the first place. I also found out that Terra Insegura will probably be out in May of next year, and got to promote it a bit to those gathered. Well worth the day right there. I’ll be having breakfast with Sheila on Saturday to talk about revisions and possible future projects, and tomorrow night I’ll be going out to the DAW dinner with the DAW editors and the other DAW writers who are here (one of whom is Patrick Rothfuss , whom I got a chance to introduce myself to earlier in the day). 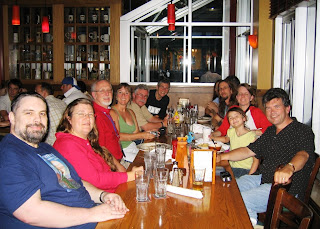 After that, it was off to dinner at the Rock Bottom Cafe (yes, we finally hit Rock Bottom) with EDGE Science Fiction and Fantasy publishers Brian and Anita Hades and various other friends and new acquaintances, including Australian author K. A. Bedford (that’s him at left front in the photo).
I wandered back down to the Sheraton to check out the SFWA Suite. Unfortunately, I knew almost nobody there and basically suffered through the whole high-school-party-when-you’re-not-part-of-the-in-crowd experience. Yay. Although I must say, thank goodness for Locus, since at least I could put names to some of the faces of the people I wasn’t talking to, like George RR Martin and Gardner Dozois and Michael Swanwick and Robert Silverberg and…well, you get the idea.
I obviously should have attended that Schmoozing 101 panel held on the first day of the con.
Tomorrow morning it’s off to the Canadian Science Fiction panel, and then I’ve got nothing specific lined up. Maybe I’ll finally attend a few panels myself. 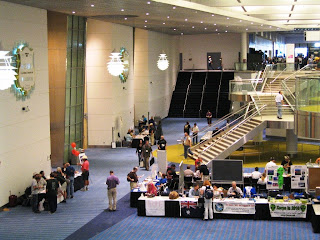 I leave you with two photos that put WorldCon into perspective in a convention city like Denver. The first is of the bid area, just outside the huge ballroom which is subdivided into multiple rooms being used for panels. (That’s Charles Stross in the middle of the picture, the bald guy in black half hidden behind some kind of sign.) 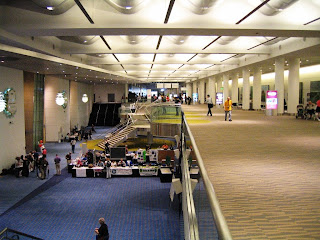 Permanent link to this article: https://edwardwillett.com/2008/08/denvention-day-2/