(OK, actually I’m posting this around midnight on Day 4, but pretend, OK?) 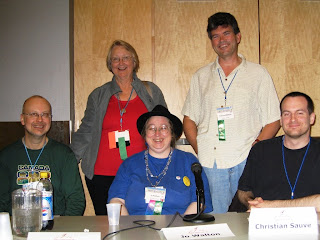 Friday was a great day at the con, starting with a good panel on Canadian Science Fiction with Barb Galler-Smith (fiction editor of On Spec magazine, who has just sold a book to EDGE), Robert J. Sawyer, Jo Walton and Christian Sauvé. We didn’t really get too much into the discussion of whether there was something distinct about Canadian SF. Rob Sawyer made maybe the best point when he noted that the best thing Canada does to help writers isn’t Canada Council grants or anything else, but socialized medicine: you don’t have to worry about medical insurance, so you’re better able to simply take the risk of becoming a full-time writer.
I did get in my point that if there was a distinct Canadian SF movement I must have missed the memo, because I don’t see myself as part of it or the kind of SF I write as being distinctive in its Canadianness, though I hope it’s distinctive in simply having come from me. 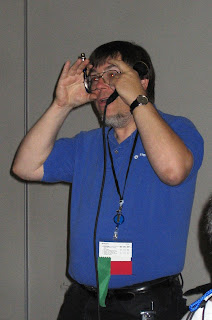 I spent time poking around the dealer’s room and the art room and so forth, then attended a presentation put on by Bill Higgins on Robert A. Heinlein’s connection to space suits. (That’s Bill at left, illustrating something about faceplates.) It was interesting, but could have been much shorter with fewer audience interruptions, most of which added little to the presentation but served, in the time-honored-but-still-annoying tradition of fans at SF conventions, as notice to the rest of us that the person making the point Knows Something that Must Be Shared immediately. 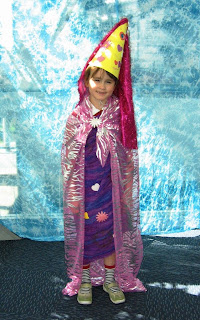 Margaret Anne and Alice went off for a kids’ costuming workshop, and together made a very nice princess costume–so nice that John Hertz gave her an award for a great hall costume, a big ribbon she wore proudly. Here she is in her costume in front of the Stargate set up outside the exhibit hall. 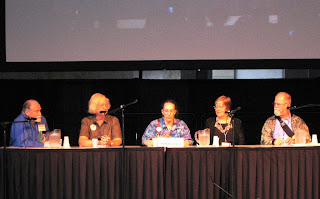 The only other panel I attended on Friday was one entitled “The ages of a writer’s life: writing to get published, writing for fans, writing for posterity.” Robert Silverberg, Connie Willis, Lois McMaster Bujold and Larry Niven were all on the panel, which was moderated by Suford Lewis. They all talked about the various phases of their writing, but for me the highlight came at the end when I had the opportunity finally to let Silverberg know that Revolt on Alpha C, his first published novel, had started me on the road to SF reading–and that his novel The World Inside contributed to my sex education. He noted the latter is being made into a TV mini-series for HBO (I think) and talked a bit about how Revolt on Alpha C came about. 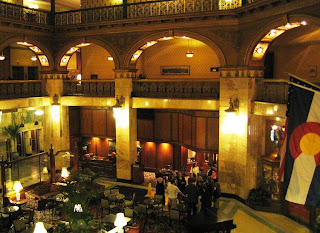 The real highlight of the day for both me and Margaret Anne, though, was the DAW dinner at this fabulous old hotel called The Brown Palace, whose interior includes a giant well with a skylight at the top, complete with enormous flag. (The small group of people is the DAW party, well-fed and lingering before heading back to hotels and other parties.) 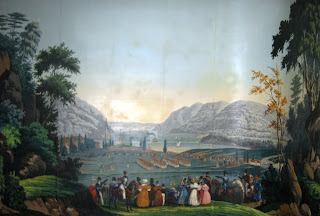 We ate in a private room called the Independence Room, whose wallpaper, dating back to the mid-19th century, matches paper that only appears elsewhere in the White House. The food and wine (especially the Pinot Noir, from the Willamette Valley) were fabulous, the company included authors such as Tanya Huff, Patrick Rothfuss, Joshua Palmatier and Kate Elliott, and the way the seating worked out, I had my editor, Shiela Gilbert, sitting beside me and we were able to get to know each other.
Oh, and did I mention the food? One of the best meals, if not the best, I’ve ever eaten, and I’m not saying that just because my publisher picked up the tab.
All in all, a terrific day.
(Well, there was the terrific downpour and lightning storm that hit just as we started the several-blocks walk to The Brown Palace from the Westin, but we hopped on one of the free buses that ply 16th avenue and rode it to the end and back around a couple of blocks the other way, which put us close to our destination just as, fortunately, the rain eased up. We only got slightly damp.)
And now I should really be posting Denvention: Day 4, which included the Hugo Awards…but it’s late and I’m heading to bed. I’ll post about the Hugos and my final two days at WorldCon on Sunday.
In the meantime, you can read the list of winners here, if you haven’t already done so. Just one note, which I’ll write more about tomorrow: Stephan Martiniere, who won the Hugo tonight for Best Professional Artist, will be doing the cover for my new novel, Terra Insegura.
How cool is that?

Permanent link to this article: https://edwardwillett.com/2008/08/denvention-day-3/