And so the whole thing winds down.

Yesterday was my favorite day in a lot of ways, although the most important factor there was only peripherally connected to the convention: I spent two hours with my DAW editor, Sheila Gilbert, in the morning going over revisions for Terra Insegura. (“Does everyone get notes like these?” I asked plaintively. “Yes,” she assured me.)
As usual, everything she said made sense and I’ll be tackling those revisions this fall–I’ve got a bit of time (with the book not coming out until May of next year) to get them done, which is great since I’ve got non-fiction deadlines keeping me hopping until the end of October (when I hope to see Sheila again at World Fantasy Convention in Calgary).
I also talked about future projects and will be sending her a couple of proposals. 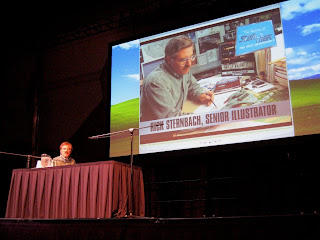 When I got over to the con, Margaret Anne and Alice and I went to Rick Sternbach‘s slide presentation of his artwork. It’s amazing to think how much of what we watched, over years of Star Trek (from Next Generation through Deep Space Nine and Voyager) was his work. I didn’t even realize he’d also done all kinds of other space art and cover art. It was fascinating and impressive.
At 3 p.m. I manned the SFWA desk in the dealer’s room for an hour–didn’t sell anything, but that was OK. I did get to meet Elizabeth Moon, who was there at the same time, and Jody Lynn Nye. Patrick Rothfuss was just wrapping up his signing when I arrived.
At 4 p.m., I sat down for signing myself, and sold a couple of books and chatted with the few people who stopped by, while Kate Elliott took my place behind the sales desk. 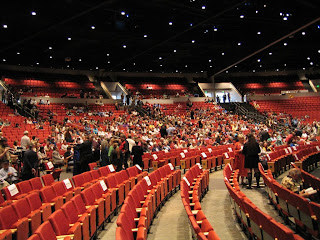 After that, we went off to dinner with an old friend, Kathy Tyers, then made our way back to the humongous Wells Fargo Theatre in the convention centre for the Hugos. Of the categories I voted in, only a couple went to the people I’d voted for, but everyone was a worthy winning. 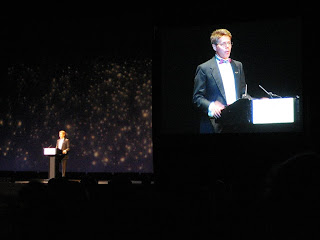 The ceremonies went smoothly and Wil McCarthy made an amiable emcee. As I noted last night, my biggest thrill was hearing that Stephan Martiniere had won the Hugo for best professional artist, since I just found out this weekend he’ll be doing the cover for Terra Insegura. 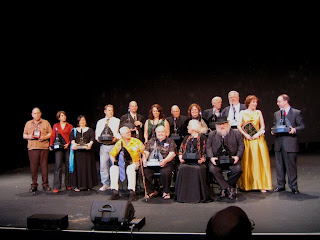 Again, the complete list of Hugo winners is here, and those are the winners (and those who received on-behalf-of) at left. 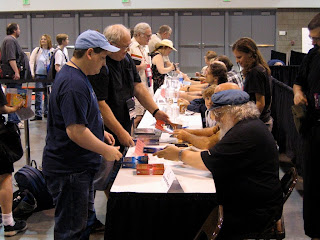 The Big One, as George RR Martin memorably called it at TorCon, the Hugo for Best Novel, went to Michael Chabon for The Yiddish Policemen’s Union, and was appropriately accepted by George RR Martin–who was singled out in the acceptance speech for having inspired Chabon’s melding of SF and literary style in the first place; that’s George RR Martin to the left, signing photographs earlier. 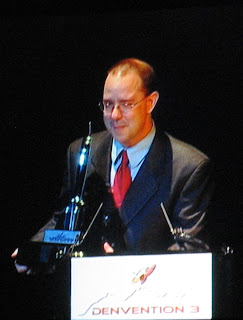 Oh, yeah, and John Scalzi, the writer of my dreams, won for Best Fan Writer.
He’s not as evil as that photo makes him look, apparently. 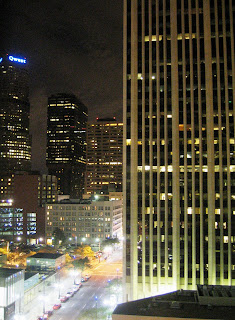 I didn’t attempt to hit any parties: we just came back to the hotel. (Which is as good a reason as any to post the picture of Denver from our hotel room at the Westin.)
This morning I had a panel on working with science and science fiction museums, and I also attended one other panel today (while Margaret Anne and Alice headed off to the Denver Art Museum), the one presented by Kristine Kathryn Rusch and Dean Wesley Smith on the place of the writer in the publishing industry. It was essentially a pep talk and good advice for writers who aren’t yet professionals, but I found a few nuggets of information in it for myself.
I picked up unsold books from the EDGE Science Fiction table in the dealer’s room, then it was down to the closing ceremonies–and Denvention 3 was over. A particularly good one for me, since at last I met my editor and some fellow DAW authors. That alone made it worth the trip.
Now we can shift into pure vacation mode. Denver Zoo tomorrow, I think, then on to Santa Fe on Tuesday.
I took photos this morning, too, but the Compact Flash card reader I purchased just a few days ago suffered the same fate as my good camera: bent pins. And yes, I was careful. This is clearly and inferior technology and I’ll never again buy anything that uses it. Anyway, until I either buy a new reader (unlikely) or a repalcement cable, I can’t download photos to my laptop.
Grrr…

Permanent link to this article: https://edwardwillett.com/2008/08/denvention-day-4-5/