I itch, therefore I scratch

(Note: The images in this post are taken from the notebook Sam kept during his training as an artillery observer in the Royal Air Force.)

Most of our training was drilling and physical exercise; trying to weed out the unfits, and how an Officer should conduct himself.

There was one lecture I will always remember on personal hygiene, and what to see and what not to see. This latter part did me in good stead when I became a Commissioned Officer.

After a short term, we Observers-to-be, were moved to St. Leonard’s where our course really started.

It was a hard course. The instructor sure put us through our paces; up at 5:00 a.m drilling on the beach from 5:30 to 6:00 a.m., with the wind blowing in from the sea. They were getting rid of the Cadets who could not take it.

We took a little of everything that we would need when we became Observers.

We had an examination and the ones who got over a certain mark, were moved to Bath. Two hundred of us passed.

After we had been in Bath for a short time, we were given an examination. It was the same examination we had written at St. Leonards. We told the examiner, who was from Headquarters in London. He immediately phoned London. He came back and told us,

“Your group has been lost, and you will stay here in Bath to take a more advanced course.”

We got instructors who had been former injured flyers. They knew nothing about the theory of flying or the subject they were supposed to teach.

As the R.F.C. had been changed to the Royal Air Force, which included the Royal Naval Air Service, we got some subjects dealing with Naval Warfare.

We were still under the Royal Flying Corps Military section for discipline and our Head Commanding Officer was Colonel Rooke. His nickname was the Mad Clown of Bath.

I will mention only one instant of the lack of knowledge some of these instructors had.

We called this instructor Split Ass Charlie, for all he talked about when he was supposed to be teaching us a subject was his acrobatics in the air when he was a fighting pilot. He had been shot down and suffered a concussion. 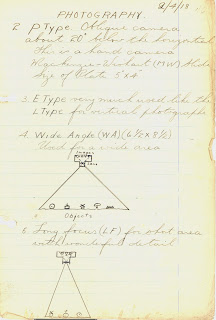 He was to give us instructions on Aerial Photography. He started talking about the camera, and the Cadet next to me said,

“Do you know what he is talking about?”

The instructor immediately said, “What are you talking about?”

The Cadet said, “I don’t understand your remarks about the camera.”

The instructor said, “Neither do I.”

He said, “Does the Cadet you were talking to understand the theory of the Camera?” 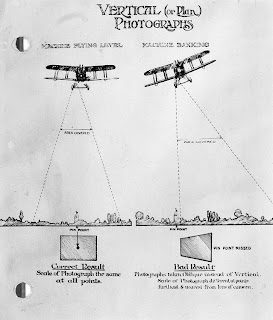 “All right, you come up here and take over.”

He went and sat in a seat.

I started out by telling the class that light travels in a straight line and any correction is done by the lens, Convex or Concave; illustrated by making a drawing on the board.

When you take a picture, the film impression or picture is upside down to the object.

Right away he shouted at me to stop pulling their legs.

I said, “O.K., I will prove it,” which I did by making a sketch on the board of a tree and then drawing lines to a camera through the lens and focal point, etc. 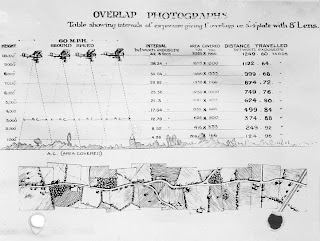 He then let me go on. I explained that when they were taking an Aerial picture, the farthest point they were taking was the closest to them in the Camera, and vice versa. Thus to get everything they must be sure to overlap the images on the films.

He thanked me, dismissed the class, and told me to stay behind.

He said, “Who are you to have that knowledge?”

I said, “I am a Technical High-School Student, studying to be an Engineer.”

They didn’t get that training in their Schools, and there were other subjects that they did not get.

The information soon got around among the instructors, and if they didn’t know a subject they would ask me.

I became conversant or knowledgeable on a subject by buying a book on the subject and studying it, therefore, I kept well informed on the subject of flying.

Permanent link to this article: https://edwardwillett.com/2008/11/the-first-world-war-memoirs-of-sampson-j-goodfellow-part-14-raf-observer-training/