On the occasion of Madeleine L’Engle’s 90th birthday…

Seizing appetite by the NAPE

At Lyme Castle I was chosen to navigate a Plane to the South of France with an Air Force Transport Pilot. Then flown to the Pilot Pool near where the Independent Air Force had 5 night Squadrons of Handley Pages which carried 3 or 4 men, 1 Ton of Bombs and 4 Lewis Guns, 2 forward and 2 at rear behind the bomb rack, one shooting up and one shooting down.

When I went in to the Pool, I was number 500, but the casualties were so great in the Independent that my turn came in a few days. I was taken to 215 Squadron as a Night Navigator at Xaffevillers–100 Squadron was on the same Airdrome.

Now I must tell you about the Independent Air Force.

It was made up out of the toughest individuals in the R.A.F. and General Trenchard was the Commanding Officer in London. He could call you down for an hour and never repeat himself. His language was terrible. 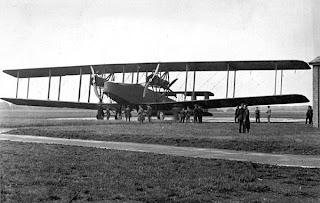 In the Independent Air Force there were 5 Night Squadrons with 4 Handley Page Aeroplanes (like the one at left–Ed) with two 250 H.P. Engines carrying approximately 2000 pounds. The Bomb Rack held 16 112-pound bombs vertical or a 500-pound or a 1000-pound strapped under the middle of the plane.

There was also one Night Squadron that had a mixture of planes; Vees or Pusher type that had Propeller and Engine behind the Pilot with the Observer in front. They did not go as far across the line as the Handley Pages and D.H. Nines.

There were 4 Day Bombers with D.H. Nines, and were being equipped with D.H. Tens. 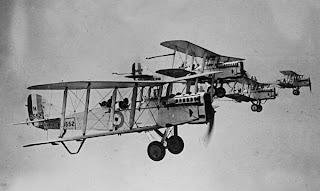 The slaughter was terrible. One day while I was there a whole Squadron of D.H. Nines (like those at left- Ed) were shot down and very few Pilots and Observers were alive after the fight. I only met one Pilot who survived and he came down on the Wing.

When you were with the Independent Air Force you only made 5 or 6 trips and that was all I made (from memory, as I have no Log Book). I will list them: Saarbrucken, Thionville (Diedenhofer as called by the Germans), Karlsruhe (a long trip), Strassbourg, and Ecouvey Junction on the way back.

One afternoon at dispatching we were informed that our object was Cologne. I looked at my Pilot and said, “That’s it.”

This meant the end of our stay with the Independent because you only had sufficient fuel to get to Cologne then fly into Holland to be interned.

The Pilot and I went to our respective huts and packed up all our clothes which we did not require for the flight. We addressed them to our people in England via Cox’s Bank who forwarded them on to their destination.

We then took our Haversacks over to the canteen and bought Chocolate Bars, etc.

Our Haversacks were then filled with our toilet articles and then we bid good-bye to our pals and then waited for take-off time.

After dinner and later in the evening, approximately 10 p.m., we climbed into our plane. The Pilot started his Engine and I checked with our Observer in the tail. I checked the Guns and also checked what Bombs we were carrying.

We waited for our call letter to depart (all the other Handley-Pages had left) and we were still sitting there in the machine when an Office Orderly came along and said we were not going. Orders had come from Headquarters that we were not to attack Cologne.

We did not know, nor did we find out the reason for us not going.

Permanent link to this article: https://edwardwillett.com/2008/11/the-first-world-war-memoirs-of-sampson-j-goodfellow-part-20-the-independent-air-force/