Seizing appetite by the NAPE 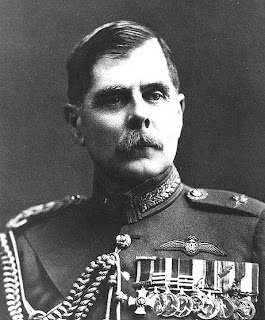 Our Top Commanding Officer was Marshal Viscount Hugh Trenchard (at left – Ed) and he was a tough individual.

He was stationed in at H.Q. in London and came over to France to find out what was happening: why the night Squadrons were not making more trips and the day Squadrons were having such trouble.

He found out, but it did not make much difference to him.

We were behind the Vosges Mountains and the mist came down so heavily that you could not see where you were going.

He visited all the nine Squadrons and gave us hell when he visited ours.

He had the Duke of York with him, later King George the VI, who just stood in the corner. This all happened at flying time, about 11:00 p.m.

He swore at us, called us liars, and said we dropped the Bombs in the fields near our objective and came back with stories that were not true.

He said, “Every plane is going over tonight from 5 Handley Page Squadrons, approximately 100 (which had 250 or 350 h.p. Rolls Royce Engines), and don’t any of you come back before going to your objective.”

He said, “The Handley Page only costs 50,000 Pounds, so don’t worry: we have lots of Planes and lots of flyers to take your place.” (Liar!)

I was standing right in front of him when he called us liars and I thought he meant me.

We were told to bomb Ecouvez Junction as our High Command knew the Germans were beaten but they were afraid that they were trying to get as much materiel back and may be trying to settle a new line (defence).

Ecouvez had a “Y” railroad running into the city, and if it was destroyed it would take time to repair.

We started from our Mess to get the latest atmosphere conditions, made a few calculations and ran to our plane, made a quick check of our Lewis Guns, got the signal from the tower and then away.

We got up as far as our 2nd lighthouse then the mist came down and we had to backtrack twice before we located our 3rd lighthouse. Then we set our course for Ecouvez.

After we crossed the line, the mist got good and thick.

The Pilot wanted to turn back and I said, “No chance.”

I said, “Neither do I, for I can’t see any landmarks, but keep going on them degrees and then I will get a bearing.”

Then I spied the Moselle River and a Steel Mill which I had seen before.

They were busy closing the Tops of the Cupolas.

The Pilot was not satisfied and still wanted to turn back.

I said, “No. No English Devil is going to call me a liar or say I am a coward, so keep going.”

We traveled a few miles on our degree reading and then I spied a railroad going the way I expected.

I said to the Pilot, “When we get near the town, come down low and be ready to keep the nose of the plane down, for I am going to drop the whole bunch of bombs at once, then circle and we will go through the town with our Machine Guns.

We, finally, reached our point. I had the bomb indicator set and the triggers in each hand.

Then when I had the 3 wires in sight, I let go.

The Pilot had the Machine in control, after dropping 1 500-pound and 8 112-pound Bombs, and the Observer was dropping 20-pound Cooper Bombs, a total of 24.

He circled the Church Spire and then we had 3 Machine Guns blazing away.

After awhile The Enemy started firing at us. We tried our best to get above their range. We could see the trace of bullets passing all around us and wondered when they would hit us.

Then the Anti-Air Guns started at us.

We had got as far as the German Headquarter for this district and they didn’t like that. We sure got our share of shells.

They knocked out our 2 engines, knocked off the lower Starboard wing and our under carriage.

The Pilot shouted at me for the Search light, but we had no power.

I dropped our Candle Parachute to see the ground, it worked O.K. but it drifted ‘away.

I said, “Good~bye, they have got you this time!”

It is a peculiar thing: you are not afraid to die. (You have been so well-trained it does not bother you.)

There was crashing and bang! the Pilot and I were sitting on the ground-with my arm over his shoulder and the Search Light in my hand. Everything was smashed. We had landed in a Forest and the trees had broken our fall.

The tail of the plane was standing nearly vertical and I got up and Good! I could walk. The Pilot had a broken ankle.

I went back to find the Observer, but he was not there.

I said, “Poor devil, he must have fallen out.”

But when I returned he was talking to the Pilot, holding him up.

Then the Pilot and I had an argument about our location.

He said, “Look, I could see our Aerodrome!”

“Yes, you can see the lights crossed over the top near our location, but we are in Germany,” I said. “I am going to set fire to the Machine.”

He said, “You better not, a machine was set fire the other night and they were in France. They got into trouble.”

Then I heard a whistle and saw smoke from a light railroad 22” gauge.

I spotted the track and crawled on my stomach to a point near the track and when the Engine passed me, I saw a German Soldier as the driver.

I waited and saw another German as the rear Brakie.

I got back to the wreck and was hunting for my Phosphorus Machine destroyer on my knees. German Soldiers all around me rushed at me with their Bayonets.

Permanent link to this article: https://edwardwillett.com/2008/12/the-first-world-war-memoirs-of-sampson-j-goodfellow-part-21-shot-down-over-germany/