A new review of Lost in Translation… 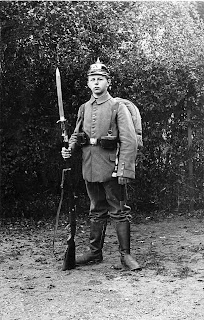 I stood up and had bayonets stuck at my waist.

They were yelling “Comrade, Comrade,” and I put up my hands and said, “Comrade” then they pulled their bayonets away.

I looked around for the other two, but they were not there. They took me out of the Forest to where they had the Pilot and Observer.

Then they took us to a Medical Hut and got a nurse and a medical attendant.

We had landed in a German Cage, where they brought Allied Prisoners.

The Observer had a great gash across his head, just above his eyes, and the Pilot a damaged ankle.

They gave them first aid. 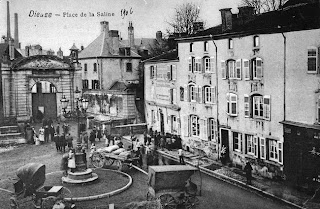 In the morning they took the Pilot and me to the German Headquarters at Dieuze. I never saw the Sergeant Observer again.

They, the Germans, are very military class regulated.

They gave the Pilot a chair to sit on, then went after me.

They wanted to know my name, Squadron where I was bombing, etc. I told them my name and for Squadron I gave the R.A.F.

I was examined by a German Captain, by Intelligence, chief, Hauptmann Mier. He looked like the Kaiser. “I don’t want to know your answer, ‘R.A.F.’! I want your Squadron!”

Then he asked me, “What was the make of that new machine that landed at your airport?”

I told him I didn’t know.

He said, “Do you know or are you just a damn fool?”

In the midst of this questioning, a German General came into the room, full dressed in all his regalia.

They all stopped and saluted the General. I stood still and did not move.

The General and the Captain had a few words, then the Captain said to me,
“Why did you not salute the General?”

The two had more words and then the Captain said, “You salute me!”

I said, “I will not. I am a British Officer and I won’t salute you.”

He went to hit me and I backed away and he chased me all around the room.

I got back to the place where we started and I said, “Damn you,” and warded off his blow and went to strike him when other Officers behind me grabbed me.

The German General said some words and then they left me alone except to say, “Are you a British regular or a volunteer?”

They gave the Pilot and me a slice of #1 Bread (White) and a cup of Barley Coffee.

We were then taken to St. Avold; the Pilot to the Hospital and me to Prison.

The truck had wooden wheels (no tires) and going over the cobblestones it was bang, bang, bang.

They put me in a room, painted windows outside and barred, military guard outside, and a Russian Batman.

Every day for 3 days they quizzed me, but they got no information from me.

One day a German Flying Observer had a go at me. I got more information from him than he got from me.

He was from Toronto and worked in the King Edward Hotel. He was a good sport and gave me 100 Cigarettes and 5 Cigars.

I had been told at our Squadron to slash my flying boots and leather jacket, etc. They took my coat before I could damage it, but I slashed my boots. The Germans did not take them but they took my Sam Brown Belt as I had on my R.F.C. Uniform.

The Leather Flying Jacket is in the Ottawa Museum.

The Russian Batman gave me a pair of Russian Boots which laced up on the outside.

I could not eat the 4th-class food, but he enjoyed it. (They did not know that I had not eaten the food.) He, being a common soldier to the Germans, was half-starved.

I was then ordered to go into the interior of Germany.

Permanent link to this article: https://edwardwillett.com/2008/12/the-first-world-war-memoirs-of-sampson-j-goodfellow-part-22-interrogation/