A preview of Saskatchewan Express

I began to think the Germans wondered who I was because they separated me from my Cadet friends and I never saw them again.

They put me in a hut with infantry officers from different parts of the Commonwealth.

The Prison Camp in Karlsruhe was in the center of the City, as was a wonderful Park, which was close to the main street.

The Prison Camp had 4 Barbed wire fences with scrambled barbed wire shoulder-high in between. Altogether it would be approximately 9′ wide and 8’ high with guards all around and a special wire gate.

I made friends with a Rhodesian Captain Hacking, who had been a South African Rugby Player and had been given a plantation in Rhodesia at a reasonable price.

To keep in physical shape, we had two wooden mallets and a wooden ball which we knocked to each other.

The wounded in our hut were terrible. The Scottish Captain had got a round of bullets on the lower right side of his waist and another Officer had his leg and right foot removed. Every Sunday they would cut away the proud flesh and wrap it with toilet paper as they had no bandages. He used to say, “If this war does not get over, I will have no leg left.” 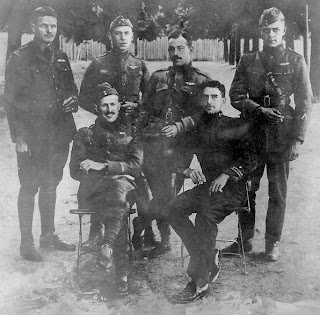 The Americans (at left: American POWs at Karlsruhe, 1918 – Ed) had a wonderful Canteen, and an American Sergeant in charge. He took a great liking to me and gave me anything I wanted: Nestle, Cigarettes, Biscuits, Candies, Chocolate Bars, etc.

An American soldier when he came to the camp got a complete outfit if he wanted it.

The American Sergeant in the Prison Camp at Karlsruhe had been informed that I was supposed to be taking an American Pilot across the line the night after I was shot down.

He was an engineering student from Cornell University.

He had been up in front of our O.C. for not crossing to his objective and he told the O.C. that his navigator was an Observer who lost himself as soon as he was in the Air.

The O.C. told him he had to go to his objective and he asked if he could have a trained Navigator.

The O.C. asked who he would like and he said, “Lieut. Goodfellow.”

He asked me and I said I would take him over for one night.

He then went to the O.C. and a transfer was given for one operation.

The fellows in our hut, when they ran out of cigarettes, would say, “Sam, go and see your American Friend and get some smokes.”

The meals were terrible, a hank of 4th class bread with a cup of burnt black barley coffee at noon and a plate of soup which you could pick the leaves out of and another piece of bread at supper, sometimes yes but most times no.

We began to get cold and we were getting colds.

The Officers had a meeting and appointed six of us to go and see the Commander about us getting a coat.

A rebellion had broken out and the soldier committee had taken over all over Germany.

The Prison Commander was still kept in charge but his rank was removed from his hat and shoulders.

I was the spokesman and I approached the German Sergeant-Major first and told him I wanted to speak to the Commander about giving us coats.

He saw the Commander, who would see us. We were marched into his Orderly Room, saluted him, and told him our request. We put on an act, doing a lot of coughing but not overdoing it.

He told the Sergeant-Major to march us over and give us a warm coat.

Unknown to us six, the other Officers were hiding near the door of the hut and when the door was open, they rushed to the entrance. I found myself hitting the opposite wall.

I bent down and grabbed an armful of material and stepped sideway and got out.

I had 2 leather coats, 2 Canvas sheep-lined one piece suits and 1 Bearskin one-piece suit. I gave them all away except one short coat as I was arranging to escape and I wanted to be able to walk swiftly.

I gave them to the wounded, except the long leather coat as a New Zealander was a sheep breeder and he wanted it as sometimes he slept outside on his plantation.

The day came when we were going to escape.

I was No. 2 in the line. No. 1 got over the last Fence and I was on the top just going to jump when a guard put up his Gun to shoot the Officer who was over. The Officer put up his hands and I turned to go in again, shouting at the other Officers to beat it.

I went through so fast I tore the coat in several places but got into the camp, hurriedly undressed and in bed snoring to pretend I was asleep. I got away with it.

Permanent link to this article: https://edwardwillett.com/2008/12/the-first-world-war-memoirs-of-sampson-j-goodfellow-part-24-prisoner-of-war/