Photo of the Day: A little pre-Christmas cheer

I finally sent them to the London Office of the Rhodesian Embassy and I hope he got them. I never heard from him.

We stayed a few days in Dover and then went by train to London; after writing a description on how we were treated by the Germans; that is, all Commissioned Officers were compelled to do this. I suppose it was a detail all armies required (Friend or Foe).

We were then allowed to go to the Bank (mine was Cox’s Bank) to get some money. 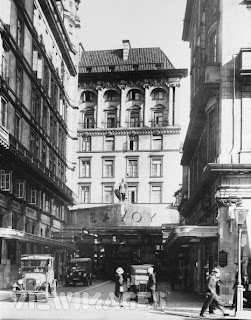 Our group met at a prearranged time and place and went and had dinner at the Savoy Hotel.

While we were having our Ice Cream and Strawberries, I heard shouting to my left and my name called.

“Sam, Sam, where in Hell have you been?” It was a Pilot named Gardner who was a classmate of mine at Tech, and had enlisted from school in the Royal Flying Corp. He was dressed to kill in a Royal Air Force Uniform, He had another Pilot with him, along with two ladies and they rushed over to our table.

He said, “I heard you were killed. Surely you are not a Ghost.”

I laughed and said, “I am very much alive.”

I introduced him to my chums and we had quite a chat. Of course he said,”You are all a sight to behold.”

I said, “So would you be if you had gone through the ordeal that we have been through.”

To give a description of myself (which was the same as the rest of us):

I had on a Royal Flying Corps Uniform and breeches greased from Top to Bottom and socks showing as they, the Germans, had taken my slashed Flying Boots. A pair of Russian Army Private Boots laced up the outside was given to me by my Batman, a German peaked paper Hat, and also, my ripped Flying Coat (that is now in the Ottawa Museum). I knew what I looked like.

We had been told to get out of sight, get new uniforms or get out of London.

I am under the impression we were the first Officers to arrive in London, as the crowd made a great fuss over us: we were museum objects.

I bid my Pals goodbye and taxied over to Euston Station and took a train to Stoke on Trent.

I had been given an open railway Warrant to travel wherever I wanted, and also, notified to report back in London in two months time for a Medical Examination.

Nancy, her Father and their friends met me at the Station and drove me to Hanley.

When Nancy’s mother saw me, she nearly took a fit. I was such a dirty looking devil and I was not allowed in the house. I was ordered into their stable yard.

My pockets were emptied and given a searching examination to see that lice were not among my money.

Then I was taken by the men over a drain and stripped of all my clothes which were immediately burned in the yard.

They then got a hose and Caustic Soap and they certainly gave me a hosing. When they were satisfied I was vermin cleaned, I was dried off, a towel wrapped around me and allowed in the house where I was sent to a bedroom where all my clothes were laid out.

I had instructed the Air Force if I was shot down, killed or captured, to send my belongings to Nancy.

I was lucky I got everything but my Hat which had a large beak and my tobacco.

I then was allowed to join the gathering and what a rejoicing! They had given me up as being killed, especially my Sweetheart, Nancy, as we were engaged to be married on January 2, 1919.

I was lucky as I was able to buy a R.A.F Hat in Hanley, I think it was the only one in that vicinity.

I got fed up with such a long leave, and asked Nancy’s Dad to give me a job around the place, he said O.K., come down to the liquor cellar and he pointed to a corner which was up to the ceiling with straw taken from around liquor.

I removed the new straw and then ran into decayed boxes and rotten straw. I had found a fortune.

I got Mr. Ridgway and showed him what I had found.

He nearly took a fit and called Mrs. Ridgway and Nancy.

The whole corner was full of different types of Liquor, and of course, Champagne.

It had been there for ages, perhaps 50 years. People just moved the top straw and never went to the wall to remove it all.

Liquor, at that time in Britain, was rationed and one had to make 3 bottles out of 2 to get to Government Regulations. Afterwards it had to be cut in half, 2 bottles out of 1.

It had to be kept secret, and Nancy’s Father said, “We will have the Champagne at the Wedding to celebrate Sam’s return and his discovery.”

Permanent link to this article: https://edwardwillett.com/2008/12/the-first-world-war-memoirs-of-sampson-j-goodfellow-part-26-reunion-in-england/