My favorite email of the year…

I have a dream…wanna see it?

After a look back at Sam’s childhood days, I’m resuming his memoirs from where they left off in Part 27, as he and his wife Nancy, post-war, are on their honeymoon.

One day we decided to go to Dalkeith and have a look at Langside Cottage. What a disappointment! It was in ruins and the whole countryside was different to what it was in my childhood and in my mind.

While we were in that part of the country, we decided to go and look at the Old Blacksmith Shop. It was just a stone throw from the Cottage.

There was a horse being shod and the old Bellows that I used to pull up and down was blowing away and Mr. Rennie Junior was shoeing a horse and fitting a hot shoe.

When he saw us he dropped his work and same over to us and asked us what he could do for us.

I smiled at him and he gazed at me bewildered.

I told him I was Sam Goodfellow.

“You are little Sammy who stayed with the Reids?”

I said, “Yes.” I then introduced him to Nancy.

The whole shop stopped work and he shouted, “Alice, Alice, come here. I have a surprise for you.”

Alice came running and was flabbergasted when he said, “This is Sammy Goodfellow and his wife Nancy.”

Alice, Mrs. Rennie, nearly swooned and grabbed a hold of me, kissing me, “My little Sammy and now an Air Force Officer!”

Then she hugged Nancy and took us into their house. Mr. Rennie stopped work for the day.

Within a few hours the whole countryside heard the news, even when miles to the surrounding country town where Fred and I went to School. Mrs. Rennie said, “If only Mother and Father and old Mr. Rennie were living to see you.”

They wanted to know where we were living and we told them Portobello. They said they would phone and tell them we were not coming back and I said, “No,” but we had to stay a few days with them, which we did, and the whole country came to see the wandering boy return to his old home. 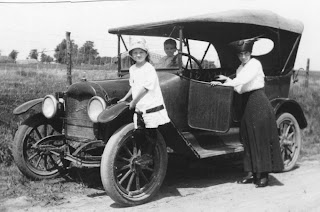 Mr. Rennie had bought a second-hand Buick Touring Car in Edinburgh (similar to the one at left – Ed), taken one hour of driving instruction, and then drove home. He put the car in one of his sheds and then realized he couldn’t or was scared to drive on the country road.

In our conversation I had told them I had been 14 months as a truck driver in France before joining the Royal Flying Corps.

That was it, I got the car started and we drove all over the countryside. He would not drive while his family was in the car.

I became the chauffeur. I then took him out alone and gave him instructions on driving the Buick and explained the gearshift, etc. Before we left he was an expert river.

He was then able to put his tools in the car and go and shoe horses at the bit farms where as before he used to take his horse and buggy.

The day came when we had to leave and return to Portobello and Edinburgh. We were all sorry that we had to go.

Permanent link to this article: https://edwardwillett.com/2008/12/the-first-world-war-memoirs-of-sampson-j-goodfellow-part-31-revisiting-boyhood-haunts/