I have a dream…wanna see it?

Marseguro among L.E. Modesitt Jr.’s list of favorite books of 2008

The First World War Memoirs of Sampson J. Goodfellow, Part 32: The Curious Case of the Steam Engine at the Zoo

They were all pleased to see us and we had lots of visitors.

During my prison leave, Nancy’s Mother and Father had a difficult time keeping me amused. 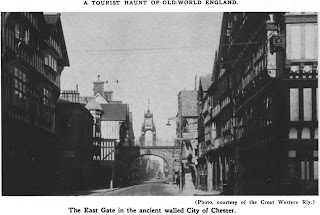 One day they suggested we drive to Chester (at left – Ed); it was a Walled City and the first I had seen. We walked along the battlement top of the walks where the inhabitants in acient times defended themselves and also entered their watch towers.

In flying around England, I had seen from the air the Hadrian Walls which the Roman Hadrian had built to keep out the barbarian invaders from the north (The Picks and the Scots) between Solway Firth and the mouth of the Tyne.

After enjoying a Chester meal, we drove back to Hanley. It certainly was an enjoyable day.

I was always impressed with history, and every time I was in a new country, I always made it a point to look up ancient fortifications, in England, Scotland, France, Belgium, and Germany. 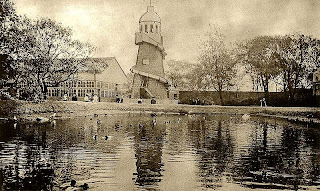 One day Mr. Ridgway had to go to Manchester on business and he asked Nancy and me to go along with him. We could visit the Manchester Zoological Gardens, as they had the finest Animal Zoological Gardens in all of Britain. (At left: part of the grounds, ca. 1906. – Ed.)

We were game to go and Mr. Ridgway drove one of his Ford Cars which had the Planetary Clutch System for changing speed ahead or reverse.

We left Hanley and arrived at Manchester about noon. Mr. Ridgway left Nancy and me to window shop while he was transacting his business and then joined us for lunch.

We then went to the Zoo and after paying an entrance fee, I spied the Power House. I could see from the outdoor exhaust pipe that they had a Steam Engine in operation. 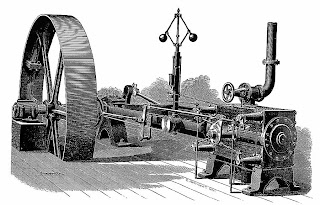 We went in to the building, met the Engineer and looked at the Engine. I said to the Engineer, “That is a Corliss Automatic Steam Engine.” (Similar to the one at left – Ed.)

He looked at me and said, “How do you know?”

I told him I had served my apprenticeship on steam engines in Canada.

“So you are an Engineer,” he said.

I said, “Yes.” I went over to the Engine and said to him, “My name is on the Brass Plate.” It was the builder of the engine, SAMPSON JOHN GOODFELLOW.

He would not believe me and I had to show him my Royal Air Force papers.

He couldn’t believe it and said, “That is the most peculiar thing I have ever known.”

He said, “How does my engine run?”

I said, “It seems to operate mechanically very well, but I will go outside and come in and tell you.”

I went outside and his exhausts were wonderful, equal cylinder exhausts from each end, and steam of a light colour. I then came back in and told him his Engine was operating O.K.

“Now I believe you that you are a steam expert.”

We left him and he was still bewildered at meeting another Goodfellow. (The name on the plate was one of my ancestors from Birmingham.)

This Engine visit brought back to me memories when I was an apprentice. An Engineer was complaining about his Engine that they bought from A. R. Williams and sent me out to see what was the matter.

He was sitting in a nice comfortable Engineer’s chair, and I asked him what was the matter.

He said, “That is why I sent for a mechanic, so you could find out. It is not correct is it?”

He sure was abrupt. The Engineers at that time were that way.

They would wear beautiful striped overalls, sit in their chairs with a piece of waste in their hands for they certainly kept their engines in wonderful shape.

I went out his Engine room door, looked at the Exhaust, and came in, went to the Engine and with a wrench adjusted a screw on the Corliss mechanism and tightened the jam nut.

I said, “How does that suit you? It is running fine now. Go outside and look at your exhaust.”

I was just lucky. I could have made it worse. If I had, I would have put the adjustment back where it was and then known it was the opposite end, but that is the chance: you take when you can’t shut the engine down.

We went through the Zoo and Mr. Ridgway had the time of his life calling the monkey Sam or Nancy. Of course, him being our senior we had to take the jokes, and laugh along with him.

We finally left Manchester before it became dark and it was a wonderful outing.

Mr. Ridgway told Mrs. Ridgway of the episode about the Engine and of course, he met some of Sam’s relatives in the Monkey Cage.

Permanent link to this article: https://edwardwillett.com/2008/12/the-first-world-war-memoirs-of-sampson-j-goodfellow-part-32-the-curious-case-of-the-steam-engine-at-the-zoo/