Marseguro among L.E. Modesitt Jr.’s list of favorite books of 2008

My daughter’s impression of science fiction

The First World War Memoirs of Sampson J. Goodfellow, Part 33: Back on Duty

Before leaving the Air Force Headquarters in London on my Prison Two Month leave, I was instructed to return at a certain date for medical examination and posting, if I was medically fit.

I was walking along the Strand when who should I run into but Roy Byrnes, a Pilot and our old Baseball Pitcher. We had quite a chat and it was the same old story; he thought I was killed. Of course, the Air Force casualties were mentioned in the paper and if you were in the Missing Column it was presumed you were dead.

Nancy and her folks were certain I was killed. They went to a fortune teller and was told you couldn’t kill that devil. He is alive and trying to escape.

I bid him good-bye and never saw him again.

I reported at Head Quarters and after a lot of paperwork, I was sent up to be medically examined.

The old Military Doctor gave me a wonderful examination and when he was through he said, “I am going to send you to a hospital for a rest period and further examination.”

He said, “What happened to you in France?”

“Doctor, my history is on my paper that you have.”

“Yes, it will be there but I didn’t read them.”

He got the paper and read them very thoroughly. I watched him nodding and he said, “Boy, you have been through hell, and you have been very lucky as a soldier and airman.”

He then wrote on my papers a few remarks about my physical condition and O.K. for duty.

I thanked him and reported at the correct quarters and was given my destination papers and railroad warrants. I then was told to report at Netheravon for Flying Duty.

This was O.K. for me as I got Lieutenant and Flying Pay as I needed it now as I was a married man and needed all the cash I could get.

I finally arrived at the Netheravon Airdrome at night and went to the Orderly Room and I was in trouble again.

A young pup of a Royal Air Force Ground Lieutenant: When I entered the room, he shouted at me why did I not salute.

I asked who the hell he was talking to and told him I would knock his block off if he talked to me that way and also, told him you didn’t salute in an Orderly Room.

I said, “Where? I don’t see anybody?”, but with that the O.C., who was hiding behind a stove, said it was “O.K., Canada.” They had been notified I would arrive that day.

It was after dinner and he had imbibed too much and was the worse for wear.

He and I laughed it off and I shook hand with the Colonel. 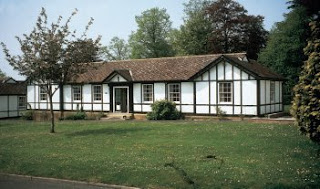 The Lieutenant gave me particulars of my sleeping quarters and other particulars: mess meal hours, and other matters. I was then told to report at the Colonel’s Orderly Room at 10 tomorrow. (At left: First World War-era officers’ quarters at Neverathon, still standing today. – Ed.)

I went to my quarters and then to the Officers Mess but who the devil did I run into but Captain Montmorency, the individual who had got me into all the trouble at Bath when I was a Cadet. Was he surprised some!

He put out his hand to shake mine and shook it then said a few words. I didn’t answer him and walked past him.

He knew that I had not forgotten. I had a Brandy and Soda and then went to bed.

It was a four-bed room; a South African Infantry Officer who had transferred to the Air Force to be trained as a pilot and two Officer Pilots from the 35 Class; Lieut. Jost, a Nova Scotian, and Lieut. Searle, a Manitobian.

The next morning when I went to have breakfast who should I run into but Heiny Rogers, a pal of mine from Regina, who was in the same 35 Class as my roommates.

Permanent link to this article: https://edwardwillett.com/2008/12/the-first-world-war-memoirs-of-sampson-j-goodfellow-part-33-back-on-duty/