My daughter’s impression of science fiction

Myths of the season

After breakfast I reported to the Orderly Room and ran into the same Orderly Room Lieutenant that I had words with the night before, but he was a different individual.

He had read my papers.

He said, “The O.C. will see you at once, as he has been waiting for you and told me to usher you in as soon as you arrived.”

I went into his Private Office, saluted and he told me to take a chair. When I sat down, he said,

“I was a little under the weather last night.”

He said, “You have come here highly recommended and I have instructions to put you in charge of the mechanical department. Lieut. Dry is acting at the present time.

“We have 3 squadrons here: 2 of them are 1 being disbanded and the best personal will be in 1 squadron; the rest will be discharged.”

He said, “This morning I have read your papers, and you certainly have had an eventful life, both as a truck driver and as a Cadet and Officer. The Guardian Angel must be looking after you. You have been through enough to be dead several times.”

He asked me about my life at Vimy and Passchendale and I gave him a short description.

He said, “What did you think when you were being Anti-Aircraft Shelled? They had your range, shot off parts of your plane and the tracers were sprinkling your plane.”

I told him I just said, “Good-bye Goodfellow, they got you this time,” then I hit the ground.

I said, “They would not get information from me even if they had threatened to shoot me.”

He said, “I wish we had more of your caliber.”

I thanked him, got up, saluted and left. Then I reported to Lieut. Dry. His promotion had not come through when the war ended. He was still a Lieut., not knowing he was going to be discharged as not suitable personnel for the permanent Air Force, but he insisted to be called Captain Dry by his subordinates, which included me. It did not bother me. I would call him any name he wished.

The Building that Captain Dry occupied was some distance from the Headquarters and the Officers Mess, but it was on the main road and I soon found the Mechanical Office with its occupants.

I informed Captain Dry that the O.C. had sent me to be his assistant.

I don’t know when he felt that his days in the R.A.F. were finished. He asked me a few questions regarding my training and my duty since joining the Army and the Air Force.

I knew right away that he was unsuited for the job he was occupying.

He told me to look around and acquaint myself with the Office, etc., and then disappeared. I knew from the action of the staff that he was not liked; they gave a sign of relief.

I looked around the Office and asked a few questions. I then visited the shops and met the Regimental Sergeant-Major and the rest of the N.C.O.s.

They were very cordial and during our conversation they knew I was no novice like Dry.

Noon hour came and I went to the Officer’s Mess and met all the Canadians of the 35th Officers Training Class. They were glad that a Canadian with some seniority had come to Netheravon. 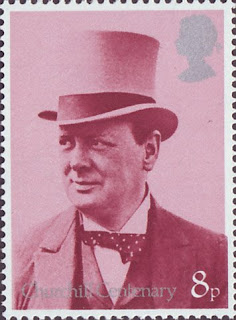 During my time at this Airdrome, the railway employees went on strike. It was a terrible thing to do just when the war was over and Britain had not got organized to peace time control; but they did not take into account that they were dealing with a tough Prime Minister: Winston Churchill. (Actually, Winston Churchill was not Prime
Minister in 1919; he was Secretary of War and Secretary of Air, as commemorated in the stamp at right. – Ed)

He organized all the available trucks and got volunteer drivers for the forces.

The populace were with him and the Government. 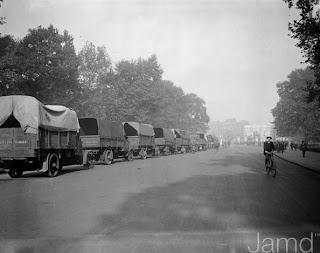 All the Canadian Officers in Class 35 volunteered to drive trucks and their run was from London to Wales carrying food from London Docks to all the places en route. (At left: military trucks in convoy during the strike – Ed.)

I was in a terrible position as I belonged to the International Association of Machinist and if it became known in Canada that I was strike breaking, it would go against me. My chums, Jost and Searle, knew I had driven a truck in France so to them I explained the situation. Everything worked out to my satisfaction as I was given an Office job routing the trucks, drivers, etc.

The strike did not last long as the Union Officials knew that Churchill would stand no nonsense.

Permanent link to this article: https://edwardwillett.com/2008/12/the-first-world-war-memoirs-of-sampson-j-goodfellow-part-34-post-war-rail-strike/