Myths of the season

The C.O. did not know what to do with the Class as flying had stopped so he put them digging ditches to run off the rain as there was no drainage on the Airdrome.

I used to have a good time kidding them when they were working leaning on the shovel.

I used to say when I was going to the Office, “come on boys, stop leaning on the shovels.”

You can imagine what they called me; they knew me being a Canadian they could get away with it. If I had been an English Officer, they would have just sworn under their breath. 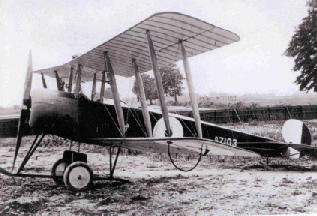 The job didn’t last long as one night we had a terrible storm which came from Plymouth. Nearly all the Aeroplanes that were left on the Aerodrome, especially the Avros training planes (like the one at right – Ed), were blown around like leaves. It was lucky that the Handley Pages were in the Hangars.

The day came when the O.C. received instructions from London Headquarters that the 35th Class was to be sent to Liverpool to embark and return to Canada.

Then word came through that a mistake had been made with them receiving flying pay as well as 2nd Lieutenant pay and that they had to return all the amount of Flying Pay that they had received.

It was impossible for them to do that as most of them had been living very high and the money was spent. How they got out of this predicament I don’t know.

The fellows were very mad about this order but they decided to have a farewell party and the organizer went around and collected Two Pounds from every Canadian, me included.

They took over the Mess Sitting Room. No one except a Canuck could enter that day. They purchased Scotch, Rye, Gin, etc.; got a big Porcelain Wash Basin, and poured the liquor in up to the brim along with some Fruit Juices. We had dinner, then went in to the party.

It was some party and the mixture out of the basin was like dynamite. I had one drink and could see things were getting rough. Me being the senior officer, I decided to get out.

I got in touch with my roommates, Jost and Searle, that I was leaving and advised them to do likewise and they agreed.

We three finally got out and went to our sleeping quarters, which was the next door building. We could hear the rumpus in the mess, and with us was our roommate.

All at once everything went quiet for about a quarter of an hour.

They had left the mess and had gone to the Ammunition Building where Flares, Rockets and Very Pistols with 3 different colors were kept under lock and key, as these were dangerous, and did they have a wonderful time setting off rockets, flares and shooting Very Pistols. It got so bad that a state of emergency was called and the Commanding Officer had the Fire Alarm sounded and troops half-dressed responded.

They chased all the class to their quarters and everything became quiet. Then we three went to sleep glad that we were not in it.

The next morning we three got up early and went into the party room. What a sight! The Piano was lying on its back; the walls were plaster board and chairs were sticking out horizontal from the walls; Crockery Glass and furniture was broken.

It was terrible that a gang could do such a thing.

London H.Q. heard about it from the Aerodrome and instructions were given to get the class on the train for Liverpool at once and then on their way to Canada. They ordered the class to pay for the damage and it was decided that Two Pounds from every Canadian would be sufficient, so it cost me another two pounds, but I was questioned and I Proved that Jost, Searle and I had left before the trouble started.

My other roommate, the South A
frican, was our witness as he had watched the trouble from our sleeping quarters along with us three.

(Four Pounds was a big price to pay for one drink!)

I asked Jost and Searle what caused all the trouble and they told me it was the order to return Flying Pay. They had done flying before I reached the Aerodrome.

The next day the class left and I was sorry to see my chums leave.

I kept in touch for a number of years with Lieut. Jost, until he died, but lost touch of Lieut. Searle.

Permanent link to this article: https://edwardwillett.com/2008/12/the-first-world-war-memoirs-of-sampson-j-goodfellow-part-35-the-canadians-trash-the-joint/