I preview The Stampeders…

I’ve been posting the First World War memoirs of my grandfather-in-law, Sampson J. Goodfellow, a few pages at a time. Coming soon: the whole thing, compiled into a single ebook. I’ll keep you posted!

After a period of time, I was ordered to report to the O.C. Orderly Room, and was asked if I would consider joining the Permanent Royal Air Force. They had found out that I was an Engineer, and a Mechanical Draftsman.

The O.C. informed me that the instructtions had come from London and he explained what a good life it was and great advantage to me as I would be promoted in Rank.

I explained to him I could not give an answer until I had thought the matter over and spoken to my wife. After a few days, I interviewed him and told him that I wanted my discharge and returned to Canada as I had promised a former employer that I was returning and they asked me to come as quickly as I could.

He was very sorry to hear my decision and would notify London H.Q. at once. 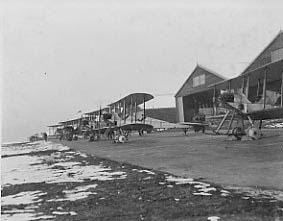 A couple of days passed and again I was informed to go to the Orderly Room. The O.C. informed me that I was being transferred to The Central Flying School at Upavon (at left – Ed). He told me I was to go there as a Lecturer on Aviation.

I packed up, not too sorry to leave. and was driven to the School. which was the most advanced school at that time.

After a few days, I was told to report to the Orderly Room and again, the O.C. told me that H.Q. London wanted me to join the Permanent Air Force and if I would, they would promote me to Field Rank (Major). This was a great tempting offer and I hesitated before giving an answer.

I then asked the O.C. if I could have a few days to go and interview my wife and her people, as my Father and Mother had passed away. I would like the opinion of my wife’s people, as they were living in England.

He consented, gave me a Pass for a few days and train Warrants. I left and went to Hanley. Nancy along with her Mother and Father and I talked the matter over very carefully.

They would have preferred their daughter to stay in England. (The Labor trouble was in progress in Winnipeg and had a big write up in Britain.)

They left the matter of me staying in the Air Force up to my wife, Nancy. Nancy decided for us to get my discharge and we would go to Regina, Canada.

I returned to Upavon and interviewed the O.C. and refused to stay in the Royal Air Force. He stated I was making a mistake and informed me that I would be placed in Reserve for 10 years and if I was wanted I had to return to England at once.

I could understand why they wanted trained personnel, as the cream of British manhood had been killed or wounded.

The young flyers had left school to join the Forces and had no practical training.

My friends in the Canadian Forces and in The Royal Canadian Mounted Police claimed we had made the correct decision.

I was not suited for life in the Forces as I could not stand discipline. They had plenty in the Forces who were ignorant of their calling. Brave? Yes, but they lacked the training and business knowledge.

There was a lot of jealousy, as the Canadians had made a wonderful name for themselves. 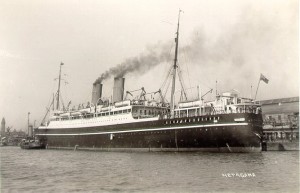 The O.C. gave orders for me to have a short leave and railway Warrants for Nancy and myself, and also written orders for us to be at Liverpool at a certain date to report to the Air Force Officer in charge to board the Metagama (at left – Ed).

I phoned Nancy and they met me at Stoke-on-Trent for my last Air Force holiday in England.

Amid tears on both sides, we said goodbye. It was very hard for Nancy as she had led a very sheltered life, but she took it very bravely.

The boat pulled out and we waved good-bye to old England.

This concludes the First World War memoirs of my grandfather-in-law, Sampson J. Goodfellow. I hope you’ve enjoyed them! – Ed

Permanent link to this article: https://edwardwillett.com/2008/12/the-first-world-war-memoirs-of-sampson-j-goodfellow-part-37-home-to-canada/