What I’ve Just Read: You Don’t Scare Me 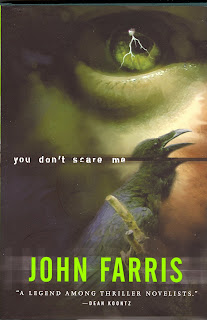 You Don’t Scare Me, a supernatural thriller by John Farris, was one of the free books I picked up at this year’s World Fantasy Convention in Calgary, and I had high hopes for it. After all, the cover blurb calls Farris is “A legend among thriller novelists,” and that’s according to Dean Koontz, who is legendary himself.

I confess, however, that I had only vaguely heard of Farris before: though I enjoy a good thriller, I don’t read them very often. Certainly the the back of You Don’t Scare Me praises his work in glowing terms drawn from reviews by the likes of the New York Times, Publishers Weekly, Fangoria, F. Paul Wilson and Richard Matheson. Impressive, all.

But all of those reviews are for a previous book, Phantom Nights. Perhaps I should have read it, because I didn’t think much of this one.

Or perhaps I’m simply not in tune with what constitutes a good thriller today. Entirely possible.

First, there’s no question Farris is a terrific writer. I thought a number of his scenes were outstanding spooky/horrific. But the parts were greater than the sum of the whole, and my final reaction, if you’ll pardon an overused turn of Internet phrase, was “Meh.”

I’ll let the flap copy take care of the plot:

Jubilation County, Georgia, Ten Years Ago
Chase Emrick was fourteen when her mother married Crow Tillman. Maybe it was his creepy name, or his sinister good looks; maybe it was the glass eye with the bolt of lightning for a pupil that he kept covered with a black eye patch, or maybe it was the rattlesnake tattoo that curled around his left wrist onto his hand, but for some reason, Chase never trusted Crow. Then one terrifying night of horror proved what Chase had felt all along . . . Crow Tillman was pure evil.

New Haven, Connecticut, Present Day
Crow Tillman is ten years dead, but he hasn’t stopped haunting Chase Emrick. Everyone she’s ever been close to suffers horrible fates, leaving Chase all alone in this world. Haunted by Crow, she has spent the last ten years of her life proving mathematically that a dimension lies unseen in our reality–one where the dead can inflict their will on the living: a netherworld of horror where Crow Tillman is in complete control. Adam Cameron is a campus cop, and he’s utterly smitten by Chase’s frailty, beauty, and genius. But getting close to Chase drags Adam into a world he didn’t bargain for and head to head with the essence of evil and the reality of death. There is only one way to get Crow Tillman to leave Chase alone: To battle him, you must first die.

Sounds cool enough, and as I said, it has some good set pieces. But in the end, I found it thin and contrived. Chase has a weird condition wherein her eyes close and she can’t open them for several minutes. I’m not sure it’s necessary. Adam is a nice enough guy, and I enjoyed being in his head, but his ultimate fate is really just disappointing, when I think it’s meant to be disquieting.

There’s a major red herring in the form of a researcher experimenting with near-death experiences, of whom no real use is made at all. And Crow Tillman, though promising enough as a villain, eventually ends up being just another variation on the unkillable fiend of low-budget horror flicks, the one that keeps coming back and coming back no matter what you do.

It must surely be a cliche by now–mustn’t it?–to end a thriller with the protagonist (and readers) realizing that the evil apparently fully defeated–because the author went all out to convince all of us it was fully defeated–is in fact coming back, and therefore all of the sturm und drang of the book and the catharsis of the climax has been one big cheat. If this were a movie, I’d expect a sequel–You Don’t Scare Me II: Eating Crow–followed by You Don’t Scare Me‘s III through IX, with sub-titles like Crow’s Revenge, Crow Comes Home to Roost, and so on through diminishing levels of quality and box office returns until the final Crow Lays an Egg puts an end to it all…for two decades, when the inevitable “reboot” comes along.

And while we’re on the subject of films, what’s with the whole section written in screenplay style? I was already thinking the book seemed more like a movie outline than a fully realized novel, and then Farris emphasized the point with this stylistic quirk in the climactic scene.

I suspect Farris has written any number of books I’d enjoy. But this isn’t one of them. You Don’t Scare Me is, I’m afraid, an unfortunately accurate title.

If you’re already a Farris fan, maybe you’ll love this. For anyone coming to him for the first time, like me…well, maybe you should try Phantom Nights.

Permanent link to this article: https://edwardwillett.com/2009/03/what-ive-just-read-you-dont-scare-me/