McNally Robinson posts an interview with me

If an author signs in a bookstore and no one comes near, does he make a sound? 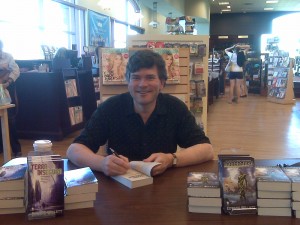 Another slow day in the bookstore signing books…just as slow as last week, alas. Which is not to say I didn’t sell any on either occasion–I sold a few–but it’s a bit discouraging all the same.

Today I was at Book & Brier, and once again it was a beautiful day outside–warmest day of the year so far–which undoubtedly didn’t help things. Even people who said they were coming didn’t come. As I said (or at least Tweeted) last week, sometimes you feel like book-writing is a communicable disease, on the level of swine flu, or something, and so people are afraid to get too close. (Considering how many books are being written, maybe it is.)

The staff told me they’d had phone calls asking about the event. I figured they were from people who wanted to eliminate the risk of accidentally arriving at the store while I was there.

Hmmm. I’m starting to sound like Rodney Dangerfield. “I tell ya, I don’t get no respect…” 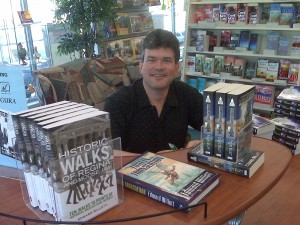 But at least I got photos!

The first one is from last week at Chapters, the second from today at Book & Brier (and thanks to my wife and her handy Blackberry for both of them).

You’ll notice a distinct change in hairstyles (although, rather embarrasingly, I’m wearing the same shirt). Last Saturday was the second-last night of Follies, and so I still had my 1970s Buddy hair. Thursday I got a nice summer trim. I much prefer the latter, even though I wore something very like the former all through the 1970s and most of the 1980s. (Except back then I had bigger sideburns, of course. And also, for much of the 1980s, a mustache. I was trying to look older. The ensuing decades have ensure that is no longer something I need to work at.)

This Wednesday I’ll be at McNally Robinson in Saskatoon, and hoping for a better turnout, though you never know.

Permanent link to this article: https://edwardwillett.com/2009/05/if-an-author-signs-in-a-bookstore-and-no-one-comes-near-does-he-make-a-sound/