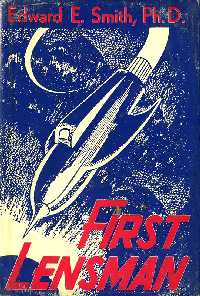 This is cool news: J. Michael Straczynski, creator of the late, lamented Babylon 5, has written a script for a movie adaptation of the Lensmen series by E.E. “Doc” Smith.

I devoured these classic space operas as a kid. The scale of, well, everything was enormous: ships the size of moons (long before the Death Star–Star Wars is small potatoes compared to Lensmen series, although there are a lot of similarities). Psychic abilities magnified by mysterious Lenses created by an incredibly advanced race to help in the battle against an equally advanced but EEEVIL race…men in space armor battling it out in hand-to-hand combat in boarding actions that took place in the open space between ships and on the ship’s hulls.

Man, I hope this movie gets made!*

Permanent link to this article: https://edwardwillett.com/2009/06/lensmen-the-movie/