As I’ve mentioned, I’m the new editor for Fine Lifestyle Regina magazine; but before I took on that job, I wrote two pieces as a freelancer for their first two issues.

Here’s the one that appeared in the premiere Spring 2009 issue, about chef Rob Fuller… 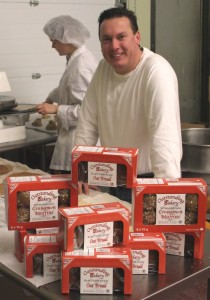 Born in Stratford-upon-Avon, England, he wasn’t sure what he wanted to do when he finished school. He considered a range of options, including the military. But “a friend of mine was having an absolute riot at culinary college,” he says, “and I wanted some of that.” And so off he went.

With his papers in hand, he cooked all over England in hotels, pubs and even fish-and-chip shops, gaining “lots of experience in the culinary arts.”

More-or-less on a whim (a friend on the move needed someone to pay for half the gas) he “packed up shop, bought a tent and sleeping bag, and moved to the south of France.”

When the money ran out, he got a job as a steward on a Japanese-owned boat called Destiny…a job that taught him a lot about wines and, just as importantly, “dealing with the upper echelon of society.”

When Destiny’s chef left while the boat was in the Caribbean, the captain, knowing Fuller was qualified, asked him if he wanted to give it a go.

“I said, ‘Sure, what the heck,’” Fuller recalls. After a three-month trial his boss was “super happy,” and so he kept the job. He travelled all over the world, eventually back in France as private chef for the al-Fayad family at the Ritz Hotel in Paris.

“Once you start working for one, dinner parties come along, and basically they come along and bribe you,” Fuller says. “You’re like a food whore at the end of the day.”

He lived that globe-trotting cooking-for-jetsetters life for 12 years and “had an absolute stellar, stellar time, learning a lot more about the culinary arts, different flavors, ideas, textures, everything that makes a good chef worldly.”

And then he met and fell in love with a Regina physician vacationing in Las Vegas…and in 1997, moved to Regina to stay. The doctor is now his wife.

His first restaurant was Thyme’s Short, located on 12th Avenue between Scarth Street and Hamilton Street, but he found it too small. After 18 months he sold it and, in partnership with Vince Medak, opened the 75-seat Zest, located in the Saskatchewan Science Centre.

The restaurant has become a favorite among Regina diners, and recently was one of only four restaurants profiled in a Japanese food magazine featuring Canadian products.

Fuller continues to cook at the restaurant four or five nights a week, “just making sure everybody’s behaving themselves.” He also supervises the creation of new menu items, although everyone at the restaurant has a hand in developing their final presentation.

Zest’s philosophy, Fuller says, is simply “great food at the right price.” The menu changes regularly, and he tries to incorporate “textures, ideas, products that aren’t traditionally served in the restaurants.”

He draws on Saskatchewan produce for many of his ideas. “We have very good supplies here,” Fuller says. “In the summer we try to go local as much as we can. There are some fantastic products that come from Saskatchewan–all sorts of really cool culinary stuff.”

On the other hand, “the positive concept with that is that you can introduce new ideas on a more regular basis.”

He gives as an example the bison they serve at Zest. “We use a shank of bison instead of a bison steak. It has equally as good a flavor and the texture is phenomenal–and it means we can have a supply that will sustain.”

Fuller says the culinary market in Regina has expanded a great deal in the past few years, with an influx of new chefs into the restaurants and, on the dining side, an influx of new Saskatchewan residents from outside the province and even the country.

“All these younger chefs are coming up with these new creative ideas,” he says, while new residents are also looking for more unique products. “That certainly helps the restaurant business.”

As well, he says, “I think people have become more aware of the fantastic food that’s out there, more up to date thanks to magazines, the Internet, TV.”

Zest is only part of Fuller’s focus at the moment. He has also spent the past few years developing new gluten-free products, both for his own Oatstanding Bakery and for other food producers.

Oatstanding Bakery has six products on the market right now. Muffins, breads, pizza bases and granola have been available for some time, and Fuller has just launched a commercial version of Zest’s “Infamous Sticky Toffee Pudding,” its signature dessert, and chocolate brownies.

“Why not?” Fuller says. He points out that last year there were 17.2 million people in North American who were gluten-intolerant.  “There’s a good market for these products.”

Fuller initially did some work developing gluten-free products for Regina’s FarmPure Foods. That company was more focused on dry mixes than on running a bakery, thought. “I decided to do the bakery, they moved forward with their dry mixes,” he says.

“We looked at what products are out there for the gluten-free clientele. A lot have an odd mouth feel, lots of starches, a crunch to it, not what you’d expect.”

Oatstanding Bakery’s muffins, on the other hand, just taste like regular muffins, and the bread doesn’t have to be toasted to be enjoyed.

The products are also all-natural and preservative-free, another selling point even for people who don’t need to avoid gluten in their diet. “The consumer is more aware, more savvy as to what they choose to consume nowadays,” Fuller says.

Fuller also helps other clients develop their own products through a company called Fuller’s Value-Added Food Creations. He’s worked with the Canadian Prairie Bison Association, for example, and also with the Northern Lights Wild Rice Company, which was looking for gluten-free muffin and pancake mixes using wild rice as a base.

“It’s working with companies to either improve or change a product that they’re working on,” Fuller says.

Developing a product from “when a guy walks in with a bag of flour” to the point where it’s ready to market is “pretty exciting,” Fuller says.

Fuller thoroughly enjoyed his time cooking for global celebrities; and yet, he says, working for local companies in Regina is “equally as much fun.”

“It’s more challenging, and definitely more real, watching Saskatchewan grow as a province, culinary wise, and the products it produces.”

Permanent link to this article: https://edwardwillett.com/2009/07/rob-fuller-from-globetrotting-chef-to-regina-restauranteur/