A new book to brag about: The Bounty Mutiny

I’ve now got an author’s page on Amazon!

…was for Blue Fire:

Amlinn gestured at her grandfather and the departing messenger. “They’re not coming.” 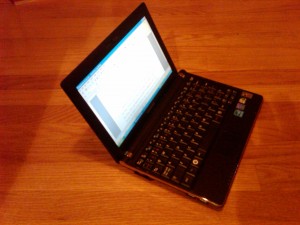 Made some good progress today, and what was particularly exciting about it had little to do with what I wrote, which was mostly of the people talking variety (though there’s a big action scene coming up next), but rather with what I used to write it: my new netbook computer, a Samsung NC10. I bought it with birthday money, and so far I’m very happy with it. Quite a decent keyboard–93 percent full-sized, which means I can still type on it comfortably, and it has nice full-keyboard-like raised keys with the tactile electric-typewriter sensation I crave. I do have to wonder if anybody who designs these keyboards is actually a touch typist, though, because, as with almost every keyboard, there’s an oddity: in this case, the right shift key is smaller than usual, which means you have to reach further with your right pinkie than normal to hit it. As a result, I type a lot of capital letters that first show up like this: \a, instead of A. I suppose I could just leave them and do a search and replace later, but still, a little annoying.

On the plus side, the Samsung NC10, almost alone among netbooks as far as I can tell, has a matte screen. Glossy screens are annoying for writers–at least, for this writer, and I think I’ve heard Robert J. Sawyer complain about them, too. So that was a selling point.

I’m planning to get by with just the netbook on my trip to WorldCon. All I ever do when travelling is write, surf the net and maybe store a few photos, and that’s exactly what the netbook is designed for. Why take something three times its size?

In the afternoon I worked on Magebane, but I don’t have a “first sentence” for it today because I finished up editing a chunk of old material. Now I really am ready to move ahead, although I’m still struggling with finding the right POV characters and a few other things. This is turning into a harder book to write than I’d thought, but I really want to get it right, since it’ll be “Lee Arthur Chane”‘s first novel! (He’s going to WorldCon, too, by the way.

I need to devote a good chunk of time either tomorrow or Friday (or both) to my new duties as editor of Fine Lifestyles Regina, but I’m determined to keep both books moving ahead at least a little. I’ll keep you posted…as always.

Permanent link to this article: https://edwardwillett.com/2009/07/the-first-sentence-i-wrote-today-84/