Blame your brain for overeating 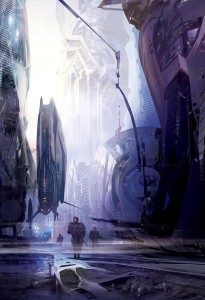 Blogger Shaun M. Duke, who really liked Terra Insegura, has chosen its cover, by Stephan Martiniere, as the winner of his award for best cover of 2009.

I agree with him, of course. It really is a terrific cover. Shaun writes:

The artwork for Terra Insegura is stunning, as are all of Martiniere’s paintings. A big plus is the cover actually matches what is in the book. What more can I say? Just look at it!

However, I must take issue with some of Shaun’s other comments in his list of awards for 2009, particularly the notion that you should refuse to buy books from someone whose opinions you disagree with, a position Shaun espouses with regard to John C. Wright and Orson Scott Card.

Buy or don’t buy books because you like or don’t like them, not because you do or don’t like something the author said. (Same thing holds for movies and music. Lots of great actors, musicians and artists are awful, awful people…but their work is still tremendous and still capable of offering value to the viewer or listener.)

In my own case, I don’t agree with anyone about everything–and the more strongly someone expresses an opinion the more likely I am to want to argue with it. Many, many writers whose work I enjoy hold political opinions I find ludicrous, annoying, and potentially harmful to society if held by enough people, but so what? Their work, as committed to the page, stands or falls on its own merits,  as far as I’m concerned.

I suspect Shaun wouldn’t agree with many of my opinions (I’m a liberally progressive  libertarian conservative, or possibly a conservatively progressive liberal libertarian, if you must know), but he likes my books. That’s because I mostly keep political opinions to myself, or only share them with very close friends, and as a result he’s probably unaware of all the things we disagree on.

Why don’t I talk about politics more? Because the waters of political discourse are poisonous, soul-sucking whirlpools today. Express a strong opinion on either side of any contoversial topic, and invite a deluge of nasty emails, personal attacks, and name-calling. And to what end? You’ll change no one’s mind, and (if you’re a writer) you’re likely to alienate potential readers.

I’d like readers of all political persuasions to read my books. They can disagree with them, hate them, love them, whatever–but I want that decision to be made based on what’s in the books, not what I might have posted elsewhere on, say, abortion, gun control, gay rights, or the abysmal record of this or that politician.

I’m glad there are plenty of writers who don’t share my reticence and are willing to jump into political discussion with both feet. I enjoy reading many of them. But I don’t plan to be one of them any time soon…and I don’t plan to boycott anyone for their expression of opinion, no matter how much I might personally disagree with it, either.

Permanent link to this article: https://edwardwillett.com/2010/01/the-world-in-the-satin-bag-picks-terra-inseguras-cover-as-best-of-2009/