Fine Lifestyles Regina has feature article about me 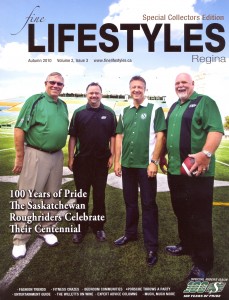 Yes, I know, I edited the thing, but honestly, the story wasn’t my idea: it was publisher Randy Liberet’s. And since I have a new book coming out (November 15 is the new release date for Song of the Sword) I’d have to have been an idiot to let modesty get in the way of promotion. And so I assigned Mark Claxton, one of the best writers available to me, the task of interviewing me and making me sound interesting. Remarkably, I think he succeeded.

The feature is called “A fantastic life” and begins thusly:

Edward Willett has a few things on his plate these days.

In fact, he could probably use a few more plates.

Known in these pages as the editor of Fine Lifestyles Regina, and sister magazines Fine Lifestyles Saskatoon, Fine Homes Regina and Fine Weddings Regina,Willett is also a writer of science books, children’s fiction and biographies, and a nationally recognized science fiction novelist. In the weeks leading up to publication of this edition, he was also completing a manuscript that was due to his publisher, working on the rewrite of another novel, and trying to make progress on a third book in which a publisher had shown interest.

Oh, and did we mention he is also an actor and singer?

“I’m on the fly all the time,” Willett says during a recent interview that is interrupted at least four times by his ringing cell phone. “I get up in the morning and think, ‘Okay, what do I have to do today?’”

As a freelance editor, writer and performing artist, Willett has worked 17 years for the privilege of being so busy. In 1993, he walked away from a full-time position as communications officer for the Saskatchewan Science Centre.

“I had an offer from Prairie Opera in Saskatoon to do a two-month school tour,” Willett recalls. “So I knew I had two months of paying work coming.

“That seemed like enough,” he adds with a laugh. “I was perhaps a little braver than I realized.”

Permanent link to this article: https://edwardwillett.com/2010/11/fine-lifestyles-regina-has-feature-article-about-me/