The conspiracy of inanimate objects 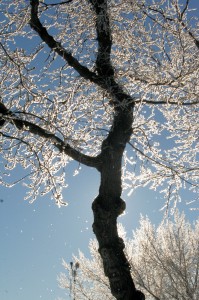 A few years ago I wrote several children’s books for the Diseases and People series put out by Enslow Publishers. It’s amazing when you’re writing about disease how easy it is to convince yourself you’ve got the symptoms of whatever you’re writing about.

The first book was Meningitis. Stiff neck? You bet. Of course, I was sitting and typing for hours on end, but I’m sure that was just a coincidence. I also wrote Arthritis (my fingers are still stiff), Ebola Virus (Ebola starts with flu-like symptoms; gee, thanks, that’s specific!), Alzheimer’s Disease (which I can barely even remember writing) and Hemophilia, which at least had the advantage of being a genetic disorder that you’re born with, so it wasn’t anything I could catch.

But just because I’m not writing books about diseases any more doesn’t free me from the tendency to suspect that every minor symptom that crops up could be the sign of the fatal disease or debilitating condition I’m always sure is lurking around the next birthday. (And yes, I did turn 50 a couple of years ago…why do you ask?)

What I’m really suffering from, of course is cyberchondria: hypochondria exacerbated by the plethora of medical information available, just a few keystrokes away, on the Internet.

This is so common a condition that there’s a Wikipedia entry for it, and where better to turn to information about an Internet-fueled problem than Wikipedia?

In an article dated November 25, 2008, John Markoff wrote about the results of a study, conducted by Microsoft, of health-related Web searches on popular search engines, combined with a survey of the company’s employees. “The study,” Markoff wrote, “suggests that self-diagnosis by search engine frequently leads Web searchers to conclude the worst about what ails them.”

The problem, says Eric Horvitz,  an artificial intelligence researcher at Microsoft Research, is that many people treat search engines as if they could answer questions like a human expert. A human expert would give you the most likely scenarios first, but in a search engine, the first couple of results aren’t necessarily the best. And if your first result upon Googling “headache” is “brain tumor,” then that tends to be where you focus. (If your blurred vision allows you to, of course.) Horvitz and fellow research Ryen W. White, a specialist in information-retrieval technology, found that Web searches were as likely or more likely to lead to pages describing serious conditions  as benign ones…even though the serious illnesses are far rarer. (That headache is far more likely to be caffeine withdrawal than a brain tumor, for instance.)

The researches found that roughly two percent of all Web queries are health-related, and about a quarter of their sample–a whopping 250,000 users–had engaged in at least one medical search during the study, with about a third of those, more than 80,000, then following up their searches focused on serious illnesses. More than half of the 500 Microsoft employees surveyed said that their online research into serious illnesses had interrupted their day-to-day activities at least once.
This phenomenon was known among med-school students long before the Internet came along, apparently. Horvitz, in the New York Times article, tells an amusing incident when, as a medical student, he remembers “sitting on a cold seat with my legs dangling off the examination table,” convinced he was suffering from a rare and incurable skin disease; but when the doctor left the room and he took a look at his chart, he found the doctor had written, “Eric is in medical school, and he has been reading a lot.”

Cyberchondria, it seems, is just basic human behaviour: we’re not particularly good at estimating the actual risk or likelihood of a particular event, and so we’re likely to give undue weight to relatively unlikely possibilities.

Which isn’t to say you should ignore symptoms, of course; but you shouldn’t jump to conclusions, either. Star Trek: Voyager may have featured a computer-generated doctor, but for the moment, you’re better off going to the real thing.

Oh, and avoid writing books about diseases. That’ll help, too.

Permanent link to this article: https://edwardwillett.com/2011/01/confessions-of-a-cyberchondriac/