On Shovelling (a winter sonnet) 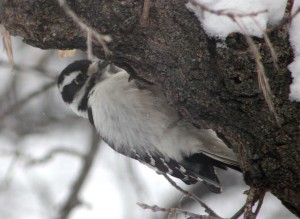 All the cool kids are writing about their experiences with ebooks these days, and since I’ve long aspired to be cool (though, alas, I have yet to reach that exalted state) I thought I would give a brief account of my own experiences as writer and reader of same.

I take you back to those long-gone days of ten years ago, when people were just beginning to talk about ebooks. Some said they’d eventually be really, really big; others pooh-poohed them (after all, can you read them in the bathtub? Huh? Well, can you?).

At the time, I’d had three novels published, all by small publishers, but I had several unpublished manuscripts. One of those, Spirit Singer, had made the usual rounds to the YA fantasy publishers during the 1990s (when, pre-Harry Potter, YA fantasy was a far, far rarer thing than it is now) with no luck, though I did receive occasional positive feedback from editors (which, as aspiring authors do, I clung to like a man lost at sea might cling to driftwood).

I became aware of a kind of alternative publishing universe, publishers who were putting out ebook originals. At the time, that mostly meant in HTML or possibly PDF format; some were also selling them on floppy disks (remember those?) and other formats. A few were beginning to put out some of their titles in print-on-demand format as well.

More as an experiment than anything else, I submitted Spirit Singer to one of these publishers, Awe-Struck. It was accepted, and shortly came out in both ebook and POD format.

Royalties were, and continue to be, miniscule. But! Spirit Singer, in its POD form, went on to win the Regina Book Award for best book by a Regina author at the 2002 Saskatchewan Book Awards, which carried with it a $1,500 prize. As well, in its POD form, Spirit Singer made it into enough libraries that it continues to generate a small amount of income annually through Canada’s Public Lending Right Commission, which pays writers an annual fee for books of theirs found in Canadian libraries.

So, my first dabble into ebook publishing was both a failure and a success. Spirit Singer failed as an ebook: in almost ten years, it has generated almost no sales. But by putting it into print, I was able to make its publication worthwhile: which indicated to me that ebooks weren’t ready for prime time, at least as far as my writing was concerned.

Fast forward to the present, though, and I now have several more books available as ebooks, with one big difference: they’re books that were first published in print, and then published as ebooks by my print publisher. All three of my DAW SF novels can be had as ebooks, for example, as can Genetics Demystified from McGraw-Hill.

But now comes a new wrinkle: a lot of authors are beginning to experiment with putting their own books out in ebook format, without going through a publisher at all: both their backlist, books traditionally published for which they own or have  obtained the ebook rights, and books that have never been traditionally published.

It seems, in fact, like the cool thing to do, and so (see my opening paragraph), I’ve tried that, too. Which is why you can now buy Andy Nebula: Interstellar Rock Star and Andy Nebula: Double Trouble as ebooks in a variety of formats, including Kindle. They haven’t exactly set the ebook world aflame, but I’ve sold a very small number of copies, and even enough money to buy a latte is more than the books were generating before (except for the PLRC payment for Andy Nebula), so, why not?

My next experiment will probably be self-publishing one of my unpublished books, one of those that has come close to publication several times over the years but never quite made it. (Probably Star Song, a book that was on the verge of acceptance by Walker & Co. some 20 years ago when Josepha Sherman was editor, but then was rejected when the publisher died and the new publisher decreed Walker would no longer publish science fiction.) But that’ll have to wait until I have time to give it a thorough edit (I suspect I can improve it quite a bit), format it, get cover art, etc., etc.

Obviously, the reason ebooks are taking off right now is the development of relatively inexpensive, hand-held readers. Back when Spirit Singer came out, this was what all those first-generation ebook publishers were talking about: that glorious future day when such readers would be widespread.

I’ve used several different devices to read ebooks. I still have a Hiebook, a Korean-made ereader with a pretty low-contrast (but backlit!) screen. I read a lot of books on that. I got hooked on David Weber’s Honor Harrington series using that ereader, because Baen Books was one of the earliest to put backlist books online for free in the hope it would spur future sales. It certainly has; I’ve been reading Weber books ever since, and buying them when they first come out.

Then, for quite a while, I read books on my Pocket PC phone. I switched from that to an iPod Touch, and now that most glorious of ebook reading devices, the iPad. For Christmas, I bought my avid-reader nine-year-old daughter a Kobo: and I’m starting to see Kobos and other ebook readers all over the place.

So it seems ebooks have arrived–but despite all the hype and excitement, it’s early days yet. Writers and publishers are scrambling, trying to figure out how things are changing and what it will mean to them personally. (Although one thing I hope it means is an end to that tired complaint “You can’t read them in the bathtub!”)

I don’t have any great insight; I’m just trying to keep tabs on whats going on and hoping, ultimately, that the upsurge in ebooks will mean that more people will read my books and enjoy the stories I’ve chosen to tell.

Oh, and pay me for the privilege. That’d be nice.

The photo: A woodpecker outside my office window.

Permanent link to this article: https://edwardwillett.com/2011/01/my-ebook-odyssey/