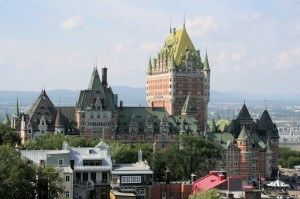 It hasn’t always been so. As a child, I was of course immersed in the done-to-death running gags of the cartoon world, where smelly cheese (always Limburger, for some reason) seemed to be thought of as a sure-fire laugh riot.

But somewhere along the way I developed a taste for it, to the point where I eat it almost daily on my lunchtime sandwics. And I’m always willing to try a new blue cheese.

Now, to be fair to those long-ago cartoon creators, blue cheese really is smelly. In fact, as a general rule of thumb, the smellier the better.

How smelly can blue cheese be? A few years ago at the International Wine and Food Festival at the Banff Springs Hotel, Spain was being featured. During a tasting of Spanish cheeses that included a cave-ripened blue, our host told the tale of the American GI who, during the Second World War, came across a cave somewhere in Europe that smelled so horrible he was certain it must be stacked with rotting corpses.

Rather than go into such a disgusting place, he stood outside and scoured it out thoroughly with his flamethrower. The result? A cave full of well-toasted blue cheese!

Because I, unlike that possibly apocryphal soldier, like blue cheese, my eye was caught this week by a news item from the University of Nottingham and the University of Northampton, whose researchers are working with Stichelton Dairy, local makers of a fine unpasteurized blue cheese similar to Stilton, to learn more about blue cheese…and make it even better.

All cheese production follows the same six basic steps. First comes acidification: a starter culture of microorganisms is added to the milk to change lactose (milk sugar) into lactic acid. This begins the process of turning milk from a liquid to a solid.

Next, rennet is added to further encourage the milk to solidify, a process called coagulation. This leads to Miss Muffet’s favorite food, curds and whey.

The curds are cut, which encourages them to expel the liquid they contain, called whey. In general, cutting curds small leads to a harder cheese, while the curds of soft cheeses like Brie are hardly cut at all.

Next comes salting. Salt both enhances flavor and serves as a preservative, and encourages the formation of a rind. It may be added to the curd or rubbed on the outside of the wheel of cheese. Sometimes, the whole cheese is bathed in brine.

Speaking of wheels of cheese, shaping is also part of the process: the cheese is put into a mold, and pressed to expel any remaining liquid.

Finally comes ripening, or, if you want to sound more cheese-knowledgeable (or possibly slightly pretentious), “affinage.” Affinage takes place in a climate-controlled environment, and it’s during this stage that a blue cheese turns blue, from molds already present in the air, sprayed onto the cheese, or injected into it.

But molds are only some of the microorganisms, collectively called “secondary flora,” active during affinage.

In fact, previous research has shown that in complex cheeses like Stilton this secondary flora varies from part to part of the cheese. The core will have one kind, the blue veins another, and the rind still another. But only some of these microflora are beneficial. Some may actually be antifungal, preventing the mold that makes blue cheese blue from growing.

Although their research has just begun, the English scientists hope to gain a better understanding of which secondary flora contribute to the development of flavor, and which need to be controlled. As a side benefit, the researchers hope to turn up new, natural antifungal co[pounds, which could be very useful for all those other food products where mold is a bad thing (which, besides cheese, is most of them).

If the research results in better blue cheese, I’m all for it. And as for the smell…well, it’s really not so bad once you get used to it.

At least, I’ve never felt the urge to flamethrower my refrigerator.

Permanent link to this article: https://edwardwillett.com/2011/02/blues-clues/