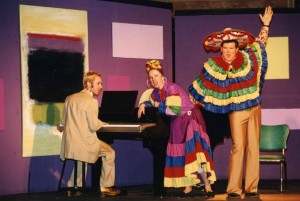 Some people are easily embarrassed. Some, not so much. I, for example, have no problem at all singing in public. (Here’s proof!). That’s not true for everyone.

Which is why, I guess, that researchers studying the neurological basis of embarrassment recently chose to trigger embarrassment by making people listen to recordings of themselves singing. Oh, the horror!

Apparently it’s a pretty reliable way to make people feel embarrassed, although I’m not sure how they screen for people like me who actually enjoy listening to recordings of ourselves.

Anyway, the method of engendering embarrassment wasn’t really the point of the study (although it’s certainly why I noticed it). The goal was to identify the neurological basis of embarrassment, and the study has given a strong indication that the seat of embarrassment in the human brain is, in fact, a thumb-sized piece of tissue in the right hemisphere of the front part of the brain.

The study was based on the long-documented fact that people suffering from a group of related neurodegenerative conditions called frontotemporal dementia do things without embarrassment that would be embarrassing to most healthy people.

The temporal and frontal lobes of the brain play a significant role in decision-making, behavior and understanding and expression of language and emotion–including embarrassment.

So for this study, the researchers, led by Virginia Sturm, a postdoctoral fellow at UCSF, took 79 people, most of whom suffer from neurodegenerative diseases, and asked them to sing “My Girl,” the 1964 Motown hit by The Temptations, with a karaoke accompaniment.

According to Sturm (and rather worrying for me), “In healthy people, watching themselves sing elicits a considerable embarrassment reaction.” Specifically, their heart rate and blood pressure both increase, and their breathing changes.

While they sang, probes measured their vital signs and cameras videotaped their facial expressions. Their songs were recorded, and then they were played back to the singers at normal speed–but without the accompanying music. Sturm and the other researchers assessed how embarrassing they found this, based on facial expressions and things such as sweating and heart rate.

Then, they put all the people through MRIs to make extremely accurate maps of their brains, which were then used to measure the volume of different regions of the brain, to see if they could find a link between the sizes of various regions and the level of embarrassment.

By way of a control, the study participants were given a “startle” test, which measures emotional reactivity: they sat quietly in a room until they were surprised by a gunshot sound.

The subjects did jump and were frightened by the sound, Sturm noted, “so it’s not like they don’t have any emotional reactions at all.” But, she said, “Patients with loss in this brain region seem to lose these more complicated social emotions”…such as embarrassment.

No, this doesn’t mean that just because you don’t get embarrassed watching yourself sing you have a neurodegenerative disorder. It may just mean you’re a ham. (“Le jambon, c’est moi!”)

Whereas changes in thinking and memory are usually easily identified by family members and doctors, changes in emotion and social behavior, being more subtle, can be missed. The researchers hope that a better understanding of the neurological basis of these changes may help loved ones and caregivers cope better with the more severe behavioral changes that can result from neurodegenerative conditions.

As for the rest of us…well, it probably doesn’t really help the easily embarrassed to know that the physiological source of embarrassment is the pregenual anterior cingulate cortex. It’s simplistic to say that if you have a big one you’re more likely to be embarrassed than if you have a small one. (There’s a joke there somewhere that I’m trying really hard to avoid.)

Embarrassment is a very complicated emotion and not one that’s fully understood by any means.

Still, this is another example of how, bit by bit, we’re mapping the regions of the brain responsible for the emotions that we experience as free-floating. We sense ourselves as being somehow separate from the wrinkled gray mass inside our skulls, but really, we’re entirely contained within it.

It’s a bit humbling, but honestly, it’s nothing to be embarrassed about.

(The photo: Cocktails for Two Hundred at Souris Valley Theatre. That’s me on the right, with Marianne Woods leaning on the piano and.)

Permanent link to this article: https://edwardwillett.com/2011/04/embarrassment/