The Space-Time Continuum: In praise of Locus

Here’s the latest of my SF/fantasy columns for the Saskatchewan Writers’ Guild’s magazine Freelance. 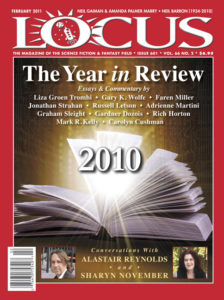 For most of the world, Charlie Brown is only a beloved cartoon character with a round head. But for those immersed in the science fiction and fantasy genres, Charlie Brown was also the nickname (though he hated it) of Charles N. Brown, owner, publisher and editor of Locus Magazine, which he co-founded in 1968 in Boston.

Although Brown died last year of a heart attack while flying home to California from a science fiction convention, the magazine that began life as a mimeographed newsletter more than four decades ago continues to thrive, under new editor Liza Groen Trombi, as the premiere source of information about science fiction and fantasy writing and publishing.

Which means that if you really want to know what’s going on in those genres, you have to read Locus, as I’ve been doing now for (gulp) some 25 years.

One annual highlight is Locus’s Year in Review issue, the 2011 version of which just arrived. It provides both commentary on the state of the genre and hard data about the business of publishing it.

Curious about how many science fiction and fantasy books are published each year? Locus has that information (with the caveat that it can only report on books it sees). The magazine notes, “The number of books broke 3,000 for the first time in 2010…a fourth year in a row of record numbers,” and adds, “despite the slow economy, publishers are still pumping out the books in ever-larger numbers; their big change is to shift away from more expensive hardcovers to trade paperbacks and more mass-market paperback originals.”

Two under-represented forms of books: POD (print-on-demand) and e-book originals, so in fact the number of science fiction and fantasy books available in some format is certainly far, far greater than even the record-breaking number of 3,056.

Looking to shop your novel to the top publishers in the field? Locus has the numbers on the various SF/fantasy imprints. Leading the pack are Tor, which published 269 books in 2010 (in all formats, both new titles and reprints), Ace, which published 105, Baen, with 72, Del Rey, with 61, Orbit US with 60, my own publisher, DAW, with 55, Roc, also with 55, Subterranean Press, with 45, and Eos and Wizards of the Coast, both with 38.

What’s the most popular sub-genre? Locus’s numbers make it clear: fantasy far outstrips science fiction, with 614 original fantasy books seen by Locus compared to just 285 SF novels. In fact, SF is a distant third to paranormal romance, which accounted for 384 original books last year and wasn’t even on Locus’s radar as recently as 2006. Horror falls not far behind SF, with 251 original books.

Science fiction and fantasy magazines continue to be probably the largest market for short fiction left to writers: but those magazines have been declining in circulation for years. It’s a rather grim part of reading the Year in Review to note that Analog, which boasted 46,324 subscribers in 1997, is down to 22,791; Asimov’s Science Fiction has fallen from 37,488 in 1997 to 17,866 last year, and The Magazine of Fantasy and Science Fiction has slipped from over 30,000 to just under 11,000. Realms of Fantasy which boasted more than 20,000 subscribers as recently as 2002, actually died last year, before being revived by a new publisher. It currently has around 9,000 subscribers.

But for once there’s a ray of hope: the Analog and Asimov’s numbers are actually up from 2009, thanks to a surge of digital subscriptions: 2,500 for Analog and 4,100 for Asimov’s. E-book readers are changing everything, and Locus will be tracking those changes in the years to come.

Information like this is just the tip of the Locus iceberg. The February issue, in addition to the Year in Review, contains, within its 82 pages of pretty fine print, interviews with author Alastair Reynolds and editor Sharyn November; the regular “People & Publishing” column with notes on milestones, awards, books sold and more; and a collection of news stories running the gamut from the financial woes of Borders to the wedding of Neil Gaiman and Amanda Palmer.

I can’t state it strongly enough: if you really want to know what’s going on in science fiction and fantasy, you should be reading Locus, either in print or the new digital edition (I’m now reading the magazine on my own science-fictional reading device, the iPad.) Failing that, at least visit the Locus website, locusmag.com, on a regular basis.

Without a doubt, Locus is the best single source of information about the fabulous field of fantastical fiction.

Much as it pains me to admit it, it’s even better than this column.

Permanent link to this article: https://edwardwillett.com/2011/04/the-space-time-continuum-in-praise-of-locus/