Cover art for Twist of the Blade! 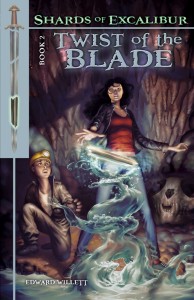 Just got the cover art for Twist of the Blade, Book 2 of my Shards of Excalibur YA series from Lobster Press. The artist is Paul Davey. That’s a different artist from last time, and so Ariane looks a little different (she seems to have lost weight). And that’s not quite the way I picture Wally. Bu it’s eye-catching!

By way of reminder, here’s the synopsis of this upcoming (though probably not until next spring, I’m told now) sequel:

In France, archaeologists have begun to investigate newly discovered cave paintings…but deeper inside the cave, resting below a pool of icy black water, lies a different treasure: the second shard of Excalibur.

Ariane may be on a quest to stop Rex Major—Merlin’s modern-day persona—from taking over the world, but she still has to deal with high school. Wally’s sister, Felicia, and her clique have vowed to take revenge, but with Ariane’s newfound powers and the first shard of Excalibur by her side, the fight takes a dangerous turn. After Felicia is gravely injured, Wally begins to question his loyalties. Can he trust Ariane or the Lady of the Lake, the woman who gave Ariane her dangerous powers? Rex Major is more than willing to take advantage of Wally’s doubts.

Ariane must recover the second shard–but this time she may have to do it alone.

Permanent link to this article: https://edwardwillett.com/2011/06/cover-art-for-twist-of-the-blade/