Seeing through someone else’s eyes 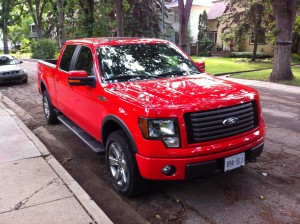 Way back in August, just before we headed off on vacation, I was given the opportunity to test drive a Ford F150 FX4…and I haven’t written about it until now.

This is rather embarrassing for someone who, as you may recall from my last test-drive post, has long been a wannabe Car & Driver road tester.

In my defense, I can only offer two excuses: a) Vacation. Drives everything else out of yer head, and b) I am so not the target market for the Ford F159 FX4.

When I wrote about the Explorer I test drove I mentioned that I’m more a car guy, and the Explorer just seemed really big. Well, the F150 seemed really REALLY big. So big I felt like I was lording it over everything else on the road, looking down on the little people in their HumVees and Cadillac SUVs.

This is not, I hasten to add, necessarily a bad sensation. In fact, I rather enjoyed it. It’s great to be able to see over almost everything in front of you. One thing I hate about other people driving big vehicles is that they block my view of the road. Not a problem while I was driving this.

Still, it all seemed a bit much for someone who was just, say, running to the gas station for some milk.

Which brings me to the other reason this isn’t really a vehicle I’m the prime target for or probably the best person to review it. Simply, I had nothing to haul. Carrying around a laptop case (worse, a netbook case) in a Ford F150 is like using a Saturn V rocket to throw a ball into the air. (OK, that’s slightly hyperbolic, but only slightly.) I should have been hauling huge chunks of steel, or bales of hay, or logs, or maybe drums of oil. Something that would make good use of the heavy duty suspension and the high road clearance and all the rest of it. 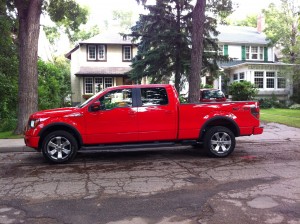 Not only that, even if I had had something to haul, the only place I needed to drive while I had the vehicle was around town. Although admittedly the street in front of our house could use some repair work, it isn’t so bad that four-wheel drive was required. And since this was August, not January, there wasn’t even any snow to try it out in.

So I felt like I didn’t give the pickup the workout you would have to give it to write knowledgeably about its no doubt spectacular capabilities as a heavy-duty workhouse.

But what I can say is that it drove easily, it rode comfortably, the interior was nice and I really liked the way the rear-view camera image showed up on the left side of the rear-view mirror.

Also, it was extremely red.

I’m glad I gave it a try. It’s not something I can every see myself buying, but for those in the need of a real workhorse that’s also a fine-looking vehicle, I’d say it’s ideal.

Myself, I think I’ll stick to a car.