Birds of a feather 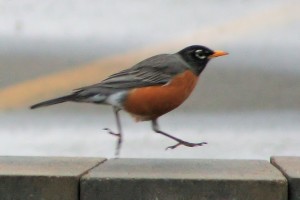 It’s a familiar sight this time of year: enormous flocks of snow geese, covering a field, then all taking flight at once, whirling and swirling in unison. It’s almost like they’re all under the control of a single mind, but of course they aren’t. In fact, they’re under the control of a multitude of minds, all of them, literally, bird brains. So how do they move in synchronicity?

Despite years of study, the phenomenon, well-known though it is, has remained a puzzle to researchers. Explanations have included telepathy (no, seriously, that was a suggestion floated in the 1930s). But it appears the actual explanation is more mundane, though no less interesting: nobody is in charge, but as each bird reacts to other birds around them, the resulting motion gives the illusion of coordination.

Charlotte Hemlrjik of the University of Groningen in the Netherlands has studied schools of fish and flocks of starlings. Starlings, which can gather in flocks with as many as 30,000 individuals, flap around for half an hour every evening before sleep. “It’s just spectacular the way they do this,” says Hemlrjik.

Fish generally only make long skinny shapes as they move in their schools, but birds make incredibly diverse shapes in their flocks. Elongated, bulbous or even shaped like an hourglass, flocks are constantly morphing.

To try to figure out the underlying logic, Hemelrijk went to work with a computer programmer, and discovered that even in the largest flocks, each bird interacts with only about seven neighbors, and maintains about the same speed: but, of course, each of those seven neighbors is also interacting with seven neighbors—and not the same neighbors. As a result, changes in direction are transmitted very rapidly through the flock: essentially, every bird’s movements are affected by every other bird’s movements, as if they were all connected together.

So, for instance, Hmelrijk found that when the birds rolled through a turn, the shape of the flock shifted from wide and flat to long and narrow, and that birds that were flying abreast of each other ended up in a single-file line.

It’s appropriate that Hmelrijk worked with a computer programmer: one reason scientists would like to understand the underlying logic of flocking is to apply it to groups of robots, so they could move in unison without colliding with one another. Some work has already been done in this area at the Laboratory of Intelligence Systems in Lake Geneva, Switzerland, which has produced flocks of small fixed-wing robots which could be valuable for mapping and for search-and-rescue work.

This kind of self-organization of a group of individual entities is called “scale-free behavioral correlation,” and it is seen in non-biological systems as well: in avalanches, for example, or in the formation of crystals.

But for “scale-free behavioral correlation” to have evolved in animals, it must offer some kind of benefit. After all, one study found that the heart rate of pigeons increases when they are forced to fly closer to each other. In other words, flocking comes with an energy cost. So what makes it worthwhile?

A recent study out of Oxford University raises the startling possibility that the benefit of flocking to birds is that it actually makes them smarter.

The study, published in the Proceedings of the National Academy of Sciences, found that larger groups of great and blue tits are better at solving problems than smaller ones.

What kind of problems? Well, not issues of world peace, I’m afraid. Rather, the researchers created a lever-pulling device the birds had to operate to get a food reward. They found that as the size of the groups increased, individual birds got more food in return for the time they spent figuring out how to work the food dispenser.

They hypothesize that when there more birds around, individual birds don’t have to spend as much of their limited brain power watching for predators, and so can devote more attention to solving the problem at hand…er, claw. In addition, social birds learn quickly from each other. One genius bird within a flock can therefore raise the intelligence of the whole group in short order.

If you’re a bird, it seems you’re just better off flocking with others of your feather. And even a bird-brain, it seems, can figure that out.

(The photo: One kind of bird that’s really not down with the whole flocking thing.)

Permanent link to this article: https://edwardwillett.com/2011/11/birds-of-a-feather-2/