Saturday Special from the Vaults: The Adventures of Bigfoot 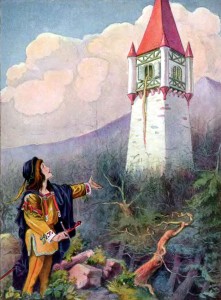 It’s said that fatherhood changes you. Take me, for instance. Until I had a daughter with long hair, I had absolutely no interest in ponytails. Now I find myself making one every morning (although, thankfully, she’s now able to do her own buns for ballet class—trying to achieve perfect bunhood…bunniness?…was way too stressful for me).

I am glad, therefore, to see that science has finally tackled the important question of scientifically predicting the shape of a ponytail.

That may sound facetious, but in fact it’s a problem that has perplexed people for at least five centuries: that’s how long ago it was that Leonardo da Vinci considered the question, remarking, in his famous notebooks, of the way that the streamlines of hair resembled the flow of fluid.

To do so, the researchers took into account the stiffness of the hairs, the effects of gravity, and the presence of random curliness or waviness. Using that information, they derived the Ponytail Shape Equation, the key to which is a new quantity called (naturally) the Rapunzel Number, the ratio necessary to calculate the effects of gravity on hair relative to its length.

“It’s a remarkably simple equation,” according to Goldstein, who is (take a deep breath) the Schlumberger Professor of Complex Physical Systems at Cambridge’s Department of Applied Mathematics and Theoretical Physics, which you have to admit sounds way more impressive than “the ponytail prof,” which I suspect he will be known as in some circles henceforth.

Why is predicting the shape of a ponytail important? It actually has a number of real-world applications, from the textile industry to computer animation to, of course, personal care products.

The research provides new understanding of how a bundle of hair swells, due to the outward pressure arising from collisions among the component hairs. Human isn’t the only thing made up of random fibers: animal hair, which we utilize in wool and fur clothing, is obviously similar, and the research adds to our knowledge of their structure and behavior.

The application to computer animation is even more obvious: hair has bedeviled animators for years. It’s very hard to make it look realistic. Having a mathematical equation that can be used to predict its behavior in the real world will make it much easier to recreate it in the virtual world.

But ultimately, the Ponytail Shape Equation is fascinating just…well, just because. “Our findings extend some central paradigms in statistical physics and show how they can be used to solve a problem that has puzzled scientists and artists ever since Leonardo da Vinci,” Goldstein is quoted as saying in a Cambridge press release. “To be able to reduce this problem to a very simple mathematical form which speaks immediately to the way in which the random curliness of hair swells a ponytail is deeply satisfying.

“Physicists aim to find simplicity out of complexity, and this is a case in point.”

He goes on to say that “at least half” of the population has direct experience with the properties of ponytails, “and we have all likely wondered about the fluffiness of hair.”

Which brings me back to my daughter’s ponytail. Perhaps someday we’ll see an app that will, from a photograph of her hair, predict the shape of the resulting ponytail from any position on her head, helping me to make it perfect.

More likely, of course, she’ll start doing her own ponytail before that day arrives.

And you know what? I’ll miss helping her with it.

I guess that’s another way fatherhood changes you.

(The image: From The Project Gutenberg eBook, Grimm’s Fairy Stories, by Jacob Grimm and Wilhelm Grimm, Illustrated by John B Gruelle and R. Emmett Owen.)

Permanent link to this article: https://edwardwillett.com/2012/02/the-rapunzel-number/