Seeking for life in all the wrong places

Where the germs are 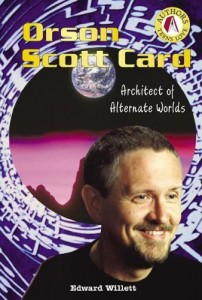 I wrote two author biographies for Enslow Publishers’ Authors Teen Love series. One was on J.R.R. Tolkien, and the other on noted SF/fantasy writer Orson Scott Card. The former was easy because he was long dead and had been written about a great deal, the latter harder because he’s very much alive and hasn’t been biographied (is that a word?) nearly as much. On the other hand, that meant I had to get information directly from him, which was cool. He was very cooperative.

Below is the first chapter of Orson Scott Card: Architect of Alternate Worlds, entitled “The Beginnings of Ender.”

And here’s an Amazon link to the book, where you will find “the rest of the story.”

Chapter One: The Beginnings of Ender

“I found myself wanting to come up with a futuristic story myself,” he says.[i]

That boy was Orson Scott Card, and the idea he came up with was the seed of an award-winning short story published years later, which blossomed into an award-winning novel, which grew into a series of novels, and which may soon be a major motion picture.

Entitled “Ender’s Game,” that story and its spin-offs have struck a chord with both adult and young readers for more than 30 years, making Orson Scott Card one of the most popular writers among teenagers, even though he doesn’t write specifically for that age group.

Besides his popular books set in “Enderverse,” the fictional future of Ender’s Game, Orson Scott Card has written dozens of novels, short stories, plays, audio scripts, musicals and articles, ranging from science fiction to political commentary to fantasy to historical to retellings of the great stories of the Bible and the Book of Mormon (see Words to Know at the end of this book).

In Ender’s Game, gifted children playing elaborate computerized war games are actually learning to fight a very real war between humans and insect-like aliens. The story gets its title from the name of the main character, Andrew “Ender” Wiggin.

Key to the story is something called the Battle Room, which Card describes as “a place contained within walls, so you don’t lose soldiers off in space during training; but still in null-G so they can get used to combat techniques.”[ii]

Card (Scott to his friends and family) came up with the Battle Room when he began casting around for an idea on which to base his own futuristic story.

“Since I had been a Civil War buff for years, and because my brother Bill was in the army at the time (and the Vietnam War was at its peak), I speculated on how military training would be different in the future,” Card recalls.

He realized that in a war in space, there would be three dimensions to think about, and that, unlike in an airplane, there would be no “down” to orient to. Thus the Battle Room, a means of training soldiers for outer-space combat.[iii]

But in the mid-’70s, Card found himself short of money. After obtaining a bachelor’s degree in theater from Brigham Young University in 1975, he had tried creating his own theater company. Unfortunately, the company was a financial failure. He was in debt, and his job as assistant editor at The Ensign, the official magazine of the Church of Jesus Christ of Latter-day Saints, didn’t pay enough for him to live on, let alone pay off his debt. A second job as a copyeditor at Brigham Young University Press helped, but not enough.

Card had been writing for years, primarily plays. He decided to see if he could make some money writing something else. He chose the science fiction market because he felt it paid well enough to make it worthwhile, but didn’t pay so well that he would be competing with the top writers in the field–because, he figured, they would all be concentrating on novels.[iv]

He pulled out a short story he had submitted five years earlier to the science fiction magazine Analog. Called “The Tinker,” it told of a tinker who had the ability to heal people’s diseases and to communicate with birds. When the villagers slaughter some birds that the tinker considers his friends, he withdraws from the village, and that winter an epidemic kills many of them. The villagers blame him for the deaths, and murder him.

Card thought it was science fiction, since it dealt with special mental abilities, a staple in many science fiction stories; he envisioned the world on which the story was set as one in another solar system that had been colonized by people from Earth. But when he submitted the story to the new editor of Analog, Ben Bova, Bova didn’t agree. To him, the pastoral setting suggested a medieval fantasy. Analog, he told Card, didn’t print fantasy.[v]

However, “Apparently he saw some reason to hope that I might have some talent,” Card says. “His rejection letter urged me to submit a real science fiction story, because he liked the way I wrote.”[vi]

He needed an idea, and he had one in hand: the concept of the Battle Room he had come up with when he was 16. But now, years later, he realized that the story would be more powerful if the soldiers being trained in the Battle Room were all little kids. “This…came out of the obvious truth that most of the time our soldiers are children, or we make them into children through training–we want them utterly dependent on their commanders for their understanding of reality, the way children are utterly dependent on their parents.”[viii]

Card began his new story, “Ender’s Game,” during an afternoon outing with a friend and her children. When it was complete, he sent it to Ben Bova at Analog. This time–after some tightening–it sold, appearing in the August 1977 issue of the magazine.

That story, by a previously unknown writer, made a splash in the world of science fiction. “Ender’s Game” was nominated for the Hugo Award, the genre’s top award (voted on by members of the annual World Science Fiction Convention). It didn’t win; but in 1978, Card won the John W. Campbell Award for Best New Writer.

Card had been right; he could write and sell science fiction. Over the next few years he sold many more short stories and several novels. Then, in 1983, Card’s agent, Barbara Bova (wife of Ben Bova, the editor who bought “Ender’s Game” for Analog), wanted to sell something of Card’s to Tom Doherty, who had just started a new publishing company called Tor Books. What she sold him was the outline for a novel called Speaker of Death (later changed to Speaker for the Dead).

Card began working on the book, but soon realized that to make it work he needed to include an adult version of Andrew “Ender” Wiggin. And in order to make that work, he also realized, he first needed to expand Ender’s story.

“I happened to be going to the ABA (American Booksellers Association convention) in Dallas,” Card says. “Tom Doherty happened to be there. I worked up my courage and found him to be absolutely approachable…

“Our ‘meeting’ consisted of walking around the ABA talking. I told him that the only way to write Speaker for the Dead was to first write a novel version of ‘Ender’s Game.’ I thought that I was going to have to start persuading or begging, that I’d have to kneel or pray. Instead, he said, ‘Sounds good to me.'”[ix]

Card went home and began to write. He wrote the first few chapters of the new novel version of Ender’s Game in one week, then went on a book-signing trip in support of another of his books, then, when he returned, finished the novel in three weeks. The whole book was written over December and January of 1983-1984.

When it appeared in 1985, it was an even bigger hit than the original novelette. It won the 1986 Nebula Award (the second-most-important award in science fiction, voted on by members of the Science Fiction Writers of America) and the 1986 Hugo Award for best novel. And then, the following year, Speaker for the Dead, with the adult Ender Wiggin in it, duplicated the feat, winning the 1987 Nebula Award and Hugo Award.

It was an unprecedented achievement. It firmly established Orson Scott Card in the top tier of science fiction writers. And it made him legions of fans, young and old, who continue to devour Card’s books.

To science fiction readers, Card seemed more or less like an overnight sensation. But in fact, the roots of Card’s writing and storytelling ability go deep into his childhood; and the ways in which he has used that ability go far beyond writing science fiction and fantasy.

Permanent link to this article: https://edwardwillett.com/2012/06/saturday-special-from-the-vaults-orson-scott-card/