Saturday Special from the Vaults: A History of Cumberland House

Saturday Special from the Vaults: Three Writers in Search of a Character

The Transit of Venus 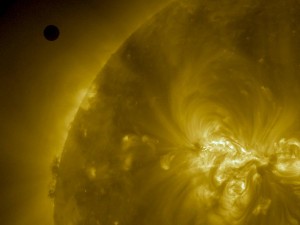 I’m writing this on June 4, the eve of one of the rarest events in the solar system: the transit of Venus.

In astronomical jargon, a “transit” is what happens when a smaller body passes in front of a larger one relative to an observer…in this case, us.

The Sun, Venus and Earth actually line up every 584 days or so, but the orbits of Earth and Venus are tilted with respect to one another, which means that normally Venus passes above or below the Sun from our vantage point. Every few decades, though, things line up just right.

Transits of Venus occur in a “pair of pairs” pattern that repeats every 243 years. Two transits take place around December 8, eight years apart. Then, 121 years and six months later, there are a pair of June transits, which occur around June 7, again eight years apart. And then, 105 years and six months after that, the December transits occur again and the pattern repeats. The June 5 transit is the second of the current pair; the last occurred on June 8, 2004.

Should you observe tomorrow’s transit, what will you see? (Assuming you have safe method of looking at the sun, that is!)

During the transit, Venus appears as a large black dot moving slowly across the blazing disk of our star. It’s a striking demonstration of just how large the sun really is. Venus, an entire planet, is only a dot…and yet Venus is 67 million miles closer!

Should you not be in a position to safely observe the transit of Venus yourself tomorrow, rest assured that there will be plenty of other people observing it on your behalf. Over the centuries, transits of Venus have provided us with important scientific data.

The first known observation of a transit of Venus was made by Jeremiah Horrocks in England on December 4, 1639 (modern calendar). Johannes Kepler’s calculations had indicated Venus should pass between the Earth and the sun, but he was a little off. Horrocks corrected Kepler’s calculations for the orbit of Venus and was the first to realize the repeating pattern. He focused an image of the sun onto a piece of paper through his simple telescope, and after observing all day finally saw the transit just half an hour before sunset, when the clouds (this was England, after all) finally cleared.

Based on his observations, Horrocks made a pretty good calculation of the size of Venus and estimated the distance of the Earth to the Sun at 59.4 million miles. He was off by a third (the actual distance is 93 million miles), but he was still closer than anyone else had been before that.

Calculating the “astronomical unit,” the distance from the Earth to the Sun, was one of the great scientific challenges of the age. For the next transit in 1761, expeditions were sent all over the world to make precise observations of the transit, because astronomers had realized that by measuring the start and finish times of the transit from various places around the globe, you could use geometry to measure the astronomical unit more accurately.

Unfortunately, in neither 1761 nor 1769 were measurements of sufficient accuracy taken. It wasn’t until the transits of 1874 and 1882 that at last the astronomical unit was measured to an accuracy of 0.2 percent.

Scientists did learn something else very interesting in 1761, though. Observing from the Petersburg Observatory, Mikhail Lomonosov detected a halo of light around the planet’s dark edge just before it moved in front of the sun’s disk. He correctly surmised that this was due to the refraction of sunlight through an atmosphere.

For the current pair of transits, research has been focused on using observations of Venus’s passage in front of the sun to refine techniques used in the search for extrasolar planets, which similarly block out a portion of their star’s light as they pass in front of it. The challenge is that the amount of light blocked by a planet is miniscule: Venus reduces sunlight by a mere 0.001 magnitude.

Related observations are being done on Venus’s atmosphere. For the first time, there is a spacecraft orbiting Venus during the transit: the European Space Agency’s Venus Express. By observing Venus’s atmosphere simultaneously from Earth-based telescopes and the Venus Express, scientists hope to not only gain a better understanding of the planet’s atmosphere, but to get a better handle on how to analyze the faint spectroscopic signals from the atmospheres of planets orbiting other stars…where a water signature in an extraterrestrial atmosphere might just be a sign of extraterrestrial life.

If, somehow, you miss this transit of Venus (or you’re reading this after it’s over)…well, no need to fret. Just mark your calendar for the next one in December 2117.

(The photo: This image from NASA’s Solar Dynamics Observatory shows Venus as it nears the disk of the sun on June 5, 2012. Venus’s 2012 transit will be the last such event until 2117. Credit: NASA/SDO, AIA)

Permanent link to this article: https://edwardwillett.com/2012/06/the-transit-of-venus/