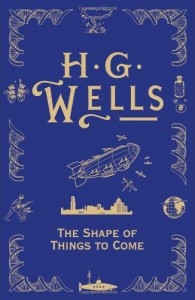 (My Space-Time Continuum column from the May issue of Freelance, the magazine of the Saskatchewan Writers Guild.)

Science fiction is popularly perceived as being concerned with predicting the future. It’s not hard to see where that notion comes from: after all, over the years science fiction has gotten quite a few things right about the shape of things to come.

In fact, The Shape of Things to Come was the actual title of a book by H. G. Wells (made into a landmark 1936 film). Though Wells foresaw submarine-launched guided missiles and got a few other technological predictions right, he was primarily concerned with the problems of society. The Shape of Things to Come envisioned major wars being fought in the 20th century, a distressingly accurate prediction.

Going back a bit further, Jules Verne envisioned a mission to the Moon launched from Florida in From the Earth to the Moon, and, of course, high-tech submarines in 20,000 Leagues Under the Sea.

Successful predictions during the Second World War famously got a few writers and publishers investigated by the FBI: they’d written about a terrifying new weapon that unleashed the energy of the atom itself.  They knew nothing about the Manhattan Project:  like the scientists themselves, they were just drawing on existing scientific knowledge.

Every day we use a technology conceived by SF writer Arthur C. Clarke: he came up with the idea of communication satellites in the 1940s, more than a decade before any satellite had been launched.

For hazardous work, scientists and engineers often use remote manipulators called “waldoes.” Why such an odd name? Because of “Waldo,” a story by Robert Heinlein, about an enormous man, trapped in orbit, who manipulated things through remote machines.

In several of his books, as early as 1942, Heinlein also described the water bed, although he foresaw it being used primarily in hospitals. More recently, Canada’s own William Gibson gave us the term and concept of “cyberspace” in his 1982 short story “Burning Chrome.”

Space exploration, of course, has always been a big SF topic. It’s been said that many, maybe even most, of the engineers and scientists who worked on the Apollo program were inspired as youngsters by Heinlein’s stories about the colonization of the moon and the planets.  But that also leads to the flip side of SF predictions:  the misses.

Heinlein’s futuristic space travelers tended to calculate orbits using slide rules. And when he did envision computers, he saw them as massive, building-filling monsters—he failed to foresee that computer power would increase as the machines shrank, rather than as they got bigger.

Jules Verne’s Florida-launched trip to the moon was conducted by the dubious method of loading the explorers into a giant artillery shell and firing them from an enormous cannon.

Arthur C. Clarke, in 2001: A Space Odyssey, foresaw giant orbiting space stations and a lunar colony, served by commercial flights, by the turn of the century. We didn’t make it.

Today, SF is still making predictions. Robert J. Sawyer has dealt with possibilities like the World Wide Web “waking up” and becoming sentient; immortality through the implantation of a copy of a person’s memories and personality into an artificial body; life-extension; and more.

Some of these predictions may come true. Many won’t. Considering how bleak predictions can sometimes be (global thermonuclear war between the U.S. and the Soviet Union was pretty much assumed in any number of stories I read as a kid), that’s just as well.

But the point isn’t whether the predictions come true, the point is that science fiction allows us to imagine different possibilities.

Science fiction is based on the thoroughly modern notion that the future will not be the same as the present. For most of human history, that hasn’t been the case: someone from 1211 would have felt perfectly at home two hundred years earlier or a hundred years later.

Now? Heinlein himself went from riding around in the buggy of his grandfather, a small-town rural doctor, in early-20th century Missouri to providing commentary on television on the first lunar landing. Jack Williamson, who died in 2006, travelled out west in a covered wagon in 1915 at the age of seven and wrote science fiction for some seven decades: his first story appeared in Gernsback’s Amazing Stories in 1928. Think of the changes everybody of his generation saw in their lifetimes.

I like to call science fiction an inoculation against future shock. SF writers may not get the details right, but one thing they do get right, over and over again: the shape of things to come may be wonderful, terrifying, or quite possibly both: but it won’t the be the shape of things as they are today.

Permanent link to this article: https://edwardwillett.com/2012/07/the-shape-of-things-to-come-science-fiction-predictions/