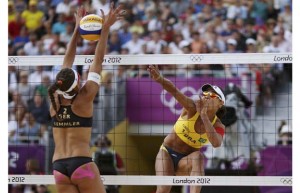 While I was browsing for another Olympic-themed column idea (as promised last week) one story particularly caught my eye: a Reuters piece by Kate Kelland headlined (in the Regina LeaderPost, at least)  “Scientists skeptical as Olympic athletes get all taped up.”

It caught my eye, not because it had a picture of female beach volleyball players in bikinis attached to it (honest!), but because I had seen, on the backs of some of the synchronized divers a few days ago, these weird pieces of colored tape…and I had no idea what they were.

Turns out they’re Kinesio tape, and it’s not new, as I has assumed: in fact, it’s been around since the 1970s, which is when it was developed by Dr. Kenzo Kase, a Japanese chiropractor and acupuncturist. However, its popularity has soared as more and more elite athletes have begun using it. (A donation of 50,000 rolls to Olympic athletes in the 2008 games in Beijing no doubt helped.)

According to the Kinesio company website, Dr. Kase developed the tape, which has a texture and elasticity close to that of living human skin, because he found standard taping techniques too restrictive for his patients. Specifically, the website claims, Kinesio tape can be used to “re-educate the neuromuscular system, reduce pain, optimize performance, prevent injury, and promote improved circulation and healing.”

Apparently it can only do those things if applied properly, though, which is why Kinesio taping is taught through a special training course.  In Britain alone, the Reuters story notes, there are currently 4,000 people trained in Kinesio taping.

So, it’s popular, it’s becoming ubiquitous, and elite athletes swear by it. But does it actually, you know, work?

According to Kelland, there has been little rigorous scientific research on Kinesio tape, but the handful of papers that have been published indicate its ability to relieve pain or improve muscle strength is actually limited.

A review of all the scientific research on the tape thus far, published in Sports Medicine journal in February, found “little quality evidence to support the use of Kinesio tape over other types of elastic taping in the management or prevention of sports injuries.”

The company responds to that by saying that research hasn’t simply caught up with the benefits users are reporting. And lots of users there are. For example, Ilka Semmler of the German beach volleyball team was sporting pink strips of tape on her buttocks in the photo accompanying the Reuters piece (the one that had nothing to do with why this story caught my eye).

Swedish handball player Johanna Wiberg wears blue tape from knee to groin. British sprinter Dwain Chambers has been known to wear it in a Union Jack design. And then there were those divers that first made me wonder about the tape: they mostly wore it in pink, in two strips on the small of the back.

The reason some scientists question the tape’s efficacy is the reason us skeptical types always question stuff like this: they’re not convinced by the underlying mechanism, which in this case is the supposed “lifting” ability of tape applied to the skin to enhance the performance of muscles deep inside the body.

Steve Harridge, a professor of human and applied physicology at King’s College London, is quoted in the Reuters article as saying, “It may be a fashion accessory, and it may just be one of those fads that come along from time to time, but to my knowledge there’s no firm scientific evidence to suggest it will enhance muscle performance.”

But both he and John Brewer, a professor of sports science at Britain’s University of Bedfordshire, who is also quoted in the article and is equally doubtful about the tape’s claims, say in effect that it doesn’t matter what they think: what matters is what the athletes think.

Like people in drug trials who find their symptoms improve even though they’re actually taking sugar pills, an effective placebo in elite athletics “could make all the difference between success and failure.”

I’m glad I could clear that up.

Permanent link to this article: https://edwardwillett.com/2012/08/lets-go-to-the-tape/