Usain Bolt? He’s not so fast 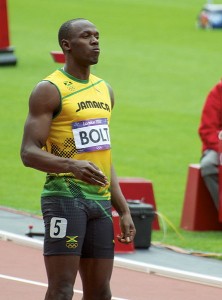 OK, admittedly the title of this column is a bit tongue in cheek. Compared to, well, any other human being on the planet, Usain Bolt is, of course, insanely fast. (I have not personally compared my speed in the 100-metre dash with his, of course, but since I’d have to stop halfway to be loaded onto an ambulance I suspect I’d have little hope of matching him.)

But compared to the rest of the animal kingdom, Usain Bolt…or any other human…is small potatoes.

In an article entitled “Animal athletes: a performance view,” the July 28 issue of Veterinary Record did the comparison, finding Bolt would trail greyhounds, cheetahs and pronghorn antelopes, among others.

Not only that, many animals beat us for strength, too.

According to Craig Sharp from the Centre for Sports Medicine and Human Performance at Brunel University, humans can run at a maximum speed of 23.4 miles per hour (37.6 kilometres/hour) or 10.4 metres per second. On the plus side, that means a fast human can outrace a dromedary…but only just; dromedaries’ top speed is 22 mph (35.3 kph), or 9.8 metres/second.

But when it comes to cheetahs, we’re not even close. A cheetah is twice as fast as an Olympic-level sprinter, able to cover ground at 64 mph (104 kph) or 29 metres/second.

And the aforementioned pronghorn antelope? He’s going to leave poor old Bolt in the dust, too, bounding away at 55 mph (89 kph) or 24.6 metres/second.

They’re not alone. The North African ostrich, Sharp notes, runs at 40 mph (64kph) or 18 metres/second, making it the fastest running bird. In the water, the record belongs to the sailfish, which can swim an astonishing 67 mph (108 kph) or 30 metres/second. Take that, Michael Phelps!

Racehorses are no slouches, either. The fastest thoroughbred has managed 55 mph (88 kph). And greyhounds, synonymous with speed among canines, cover ground at 43 mph (69kph).

It’s perhaps unfair to include flying birds, since humans can’t fly, but still, it’s worth noting their impressive achievements in the air: peregrine falcons can reach speeds of 161 mph (259 kph), while even the ubiquitous ducks and geese can reach 64 mph (103 kph) in level flight.

On the power side of the ledger, you might think birds would be pretty weak…but you’d be wrong. Flying requires a lot of energy, and pheasant and grouse, to name just two, can generate 400 Watts per kilo from their wing muscles—five times as powerful as trained athletes. Even hummingbirds, tiny though they might be, can manage 200W/kg.

Strength? Even those massive Olympic weightlifters wouldn’t stand a chance in an all-species Olympics. The African elephant can lift 300 kg with its trunk and carry 820 kg. A grizzly bear can lift 455 kg. And gorillas? 900 kg.

Sharp admits that humans have adapted remarkably well to long-distance running, thanks to long legs, short toes, arched feet, and ample fuel storage capacity. But camels can trot at 10 mph (16 kph) for more thanr 18 hours. And then there are Siberian huskies: in 2011, a team raced for eight days, 19 hours, and 47 minutes, covering 114 miles a day.

David Rushida ran 800 metres in one minute 41 seconds, compared with 33 seconds for the pronghorn antelope and 49.2 seconds for a greyhound.

An endurance horse ran a full marathon in one hour 18 minutes and 29 seconds, compared with the two hours, three minutes and 38 seconds of Patrick Makau Musyoki.

In the long jump, a red kangaroo has leapt 12.8 metres, compared to the 8.95 metres Mike Powell achieved. Its high jump of 3.1 metres exceeds Javier Sotomayor’s of 2.45. Sotomayor is even outdone by the lowly snakehead fish, which can leap four metres out of the water

But don’t let all this get you down. Remember, there’s one thing no animal has ever managed to do: deliberately throw a badminton match.

For that, you need a human.

Permanent link to this article: https://edwardwillett.com/2012/08/usain-bolt-hes-not-so-fast/