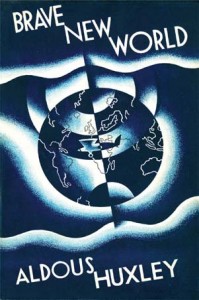 The Hunger Games may be getting all the attention right now, but there’s a long history to dystopian science fiction. War of the Worlds, Brave New World, 1984, A Canticle for Leibowitz, A Handmaid’s Tale…the list goes on and on. I’ve written some myself.

Dark and dangerous futures are, of course, ripe settings for fiction. (As are dark and dangerous pasts or presents, for that matter.) They provide the author with plenty of opportunities for adventure and excitement, as the heroes struggle to survive against nature, their fellow humans, or (in science fiction and fantasy) aliens, zombies, goblins or what-have-you.

I mean, there’s a good reason you don’t see many Star Trek stories set on Earth: Earth is presented as pretty much a perfected utopia, and unless it’s threatened from outside, it just doesn’t offer many storytelling opportunities.

But David Brin, scientist, inventor, and New York Times-bestelling science-fiction author, thinks the tendency to paint the future using only the darkest colours of the palette is “what is wrong with science fiction today.”

He makes the statement in a recent interview on the website Geekwire. “Too many authors and film-makers,” says Brin, “buy into the playground notion that cynicism is somehow chic and knowing.”

“Playground notion” seems a particularly apt phrase to me and, I suspect, anyone else who has worked a lot with teen writers. There’s a phase young writers tend to go through where every story has to be dark and depressing. I think it’s an effort to achieve gravitas, to write something deep and important, although in practice that means, if you’re reading a lot of teen writing, way too many stories involving car crashes, cancer, death or abuse. Brin seems to be saying, and I’d concur, that some writers never grow out of that phase.

Brin continues: “So many 50- or 80-year-old clichés are rampant (e.g. “hey look, I invented suspicion of authority!”) while nostalgia pushes aside what used to be our genre’s golden notion: that we in this civilization might find ways to improve, to solve problems, to become better than we were.”

A difficult task, he admits, “fraught with many pitfalls.” But, he says, too many creators portray the future as hopeless.

“How pathetic!” says Brin. “That beneficiaries of relentless progress should repay that debt by casting doubt on the very possibility of progress?” Nor is this political, in his view. “I see the habit spewing from both ends of the hoary, lobotomizing so-called ‘left-right axis.’ My late, lamented friend Ray Bradbury called this fetish the very lowest form of ingratitude.”

“But wait!” some may cry. “It’s not realistic to portray the future in sunny terms. Just look at all the problems in the world today!”

Brin doesn’t deny that there’s a place for dark fiction. He points to Bradbury again. “Ray plumbed the darkest depths of the human soul, in tales that could freeze your heart. So? He considered fantasy chills and terrifying sci-fi what-ifs to be part of exploring our dark corners and failure modes.” But, he continues, those dark stories were “always aiming to achieve effective warnings. Self-preventing prophecies.”

You might call that dystopia-as-prophylaxis: by presenting a dark and disturbing future, and detailing how our present led directly to it, you can convince people in the present to take the steps necessary to prevent that future. (Would 1984 have been more like 1984 if George Orwell had never written 1984?)

“Some of us are rebelling,” says Brin. “Neal Stephenson, Kim Stanley Robinson, Greg Bear and others have been laying down a challenge to our peers. If you think we have problems, expose them! But spare a little effort to suggesting solutions. Or stoking others with belief that we can.”

Of course, then you face counter danger: that, rather than wallowing in cynicism and hopelessness, you end up writing your story from atop a soap box or behind a pulpit. That can turn readers off, and if they never finish your book, they’ll never be exposed to your solutions for the problems you foresee.

That may happen anyway if they disagree strongly with either your diagnosis or your solutions you present. Pace Brin, that really does get into politics, because for every person who thinks “the government ought to do something” there’s another who thinks the government does way too much already and is far better at making things worse than it is at making things better.

But if you write a compelling story, even those who disagree with you will read to the end. And if they end up arguing with you along the way, or arguing about your ideas with others, then you’ve still done something to shape, and hopefully, improve, the future.

The broad gate and road lead to fictional futures of cynicism and hopelessness, while the narrow gate and strait road lead to possible futures where things may yet be better than they are today.

Or, to  paraphrase another famous quote, “Cynicism is easy…hope is hard.”

Permanent link to this article: https://edwardwillett.com/2012/09/the-space-time-continuum-cynicism-vs-hope-in-science-fiction/

Leave a Reply to The Necromancer Cancel reply