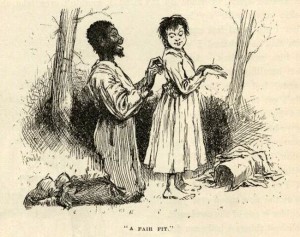 There’s a scene in Huckleberry Finn where Huck is attempting to pass himself off as a girl, but is betrayed, in part, by the way he throws a lump of lead at a rat: “And when you throw at a rat or anything, hitch yourself up a tiptoe and fetch your hand up over your head as awkward as you can, and miss your rat about six or seven foot. Throw stiff-armed from the shoulder, like there was a pivot there for it to turn on, like a girl; not from the wrist and elbow, with your arm out to one side, like a boy.”

There’s a reason “You throw like a girl!” is a classic schoolyard taunt: boys really do throw better than girls, as freelance science writer Tamar Haspel points out in an article published in the September 10 Washington Post.

As Haspel recounts, Janet Hyde, a professor of psychology and women’s studies at the University of Wisconsin at Madison, has studied the gender gap across a variety of skills, analyzing the vast quantity of data collected over the years in studies of social, psychological, communication and physical traits, skills and behaviors. She’s found only two skills in which there is a “very large” difference between boys and girls: throwing velocity and throwing distance.

Jerry Thomas, dean of the College of Education at the University of North Texas in Denton, who has researched the “throwing gap,” told Haspel, “The overhand throwing gap, beginning at four years of age, is three times the difference of any other motor task, and it just gets bigger across age. By 18, there’s hardly any overlap in the distribution: nearly every boy by age 15 throws better than the best girl.”

It’s cross-cultural: around the world, pre-pubescent girls throw only 51 to 69 percent of the distance that boys do, at only 51 to 79 percent of the velocity. The difference increases with age: one U.S. study found that girls age 14 to 18 threw only 39 percent as far as boys.

There is a “nurture” factor: in most cultures boys start throwing earlier and throw more often than girls. But a study Thomas carried out with Australian aboriginals, in whose culture both men and women hunt and both sexes throw from childhood, found that, although aboriginal girls threw significantly better than girls from other cultures, they still threw at only 78.3 percent of the velocity of boys.

The widening gap after puberty can be explained by differences in size and strength, but before puberty?  It all comes down to style.

Hamal writes, “According to Thomas, a girl throwing overhand looks more like she’s throwing a dart than a ball. It’s a slow, weak, forearm motion, with a short step on the same side as the throwing hand. A boy’s throw, by contrast, involves the entire body.”

Thomas goes on to say that a skillful overhand throw uncoils in three phases: step with the foot opposite the throwing hand, rotate with the hips first, then the shoulders, and whip with the arm and hand. Girls don’t do any of these as successfully as boys, but the biggest problem is rotation. The separate turning of hips and shoulders is what gives a throw its power. Women tend to rotate their hips and shoulders together.

OK…but, why? There’s no apparent muscular or structural reason.

Thomas’s best guess is that it’s neurological: girls’ brains default to a different throwing style than boys’. It makes some kind of evolutionary sense: among our ancestors, men typically threw rocks, and those that threw them well got more food, and more women. Women did the gathering and often had a baby with them. Women may not rotate their hips and shoulders separately because they’ve evolved to throw while holding a baby, Thomas suggests.

Saying the difference in throwing styles is hard-wired isn’t the same as saying girls should just give up on throwing, though. Jenn Allard, who has coached women’s softball at Harvard for 18 years, says overhand throwing is the most under-taught skill in softball. If you don’t want to throw like a girl, you don’t have to.

Or vice versa. Should any modern-day Huck Finn have a need to pass himself off as a girl, he can learn the skill of throwing like one…just as long as he doesn’t need to kill any rats.

Permanent link to this article: https://edwardwillett.com/2012/09/throwing-like-a-girl/