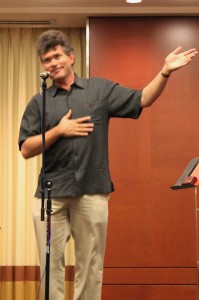 I’ve sung all my life, in church, in choirs, and on-stage, both just for fun and professionally. And through all those years, I’ve heard music teachers say anyone can learn to sing…and the occasional person who counterclaims (and through their singing seems to support the statement) that, well, no, they can’t.

In “Singing proficiency in the general population,” a study conducted by psychologists Simone Dalla Bella of the University of Finance and Management in Warsaw, and Jean-François Giguère and Isabelle Peretz of the University of Montreal, and published in the February 2007 Journal of the Acoustical Society of America, the researchers point out that “singing abilities emerge spontaneously and precociously,” with the first songs being produced at around one year of age and recognizable songs starting to emerge at 18 months. This indicates that singing is really does come naturally to humans…yet, most people believe that the ability to carry a tune is unevenly distributed in the general population.

To test that belief, the psychologists recruited 20 individuals (a.k.a. Group 1), 10 males and 10 females aged 19 to 29, from the University of Montreal community, and an additional 42 individuals (Group 2), 19 males and 23 females, selected randomly in a public park. Group 1 was deliberately made up of non-musicians and no selection based on musical ability was made in Group 2 (whose members were told by the experimenter it was his birthday and he had made a bet with friends that he could get 100 individuals each to sing the well-known refrain to the song Gens du pays in honour of that fact).

The recordings were analyzed, both by a group of 10 non-musicians and by computer, for accuracy in pitch and time duration of the notes. The result: the occasional singers were found to have less control over pitch relative to time as compared to expert singers and tended to produce more out-of-key pitch intervals than the professionals, as you might expect. But the researchers noticed that the occasional singers also tended to sing the piece much faster than the professionals—and those who slowed down exhibited accuracy comparable to the professionals, suggesting some of those errors were simply caused by rushing.

(The rushing wasn’t surprising: the findings suggest occasional singers don’t remember tempo well: the tempos they chose only fell within eight percent  of the tempo of the most frequently heard recordings 11 percent of the time. On the other hand, even untrained singers show a remarkable sense of absolute pitch: 72 percent of the performances placed the first note within two semitones of the original first note in the recordings.)

To test the hypothesis that rushing caused the bulk of the errors, the researchers did a follow-up study with 15 participants from Group 1 three years later. They found that when they slowed the singers down with a metronome, pitch accuracy increased dramatically, falling within the range exhibited by the professionals.

All of which suggests, as music teachers would have it, that singing is indeed a widespread skill, and what most people lack isn’t ability, but training.

That distinguishes them from the four percent of the population that is literally tone-deaf, unable to distinguish differences in pitch. These singers could distinguish the correct pitches, they just couldn’t produce them.

Which means that, indeed, there are people who literally cannot sing on-pitch…but very few of them. The real take-away of the study, according to the authors, is that “singing in the general population is more accurate and widespread than is currently believe. The average person is able to carry a tune almost as proficiently as professional singers…In short, singing appears to be as natural as speaking with the added value of promoting social cohesion and activity coordination at a group level.”

And that, for sure, is something to sing about.

Permanent link to this article: https://edwardwillett.com/2012/10/sing-sing-a-song/