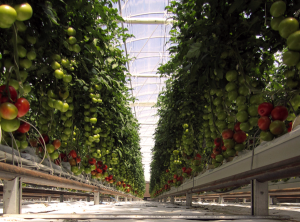 If I told you something has been built in the Australian outback in the past couple of years that can be solidly argued is one of the most important technological advances in decades, would you have a clue what I was talking about?

You wouldn’t? Well, I wouldn’t have either until this past weekend when I read an article by Jonathan Margolis from The Observer newspaper in England.

A little humbling, but you can’t keep up with everything. Anyway, now that I have heard about it, I’m quite excited: because it is there, in a seaside desert outside Port Augusta, three hours from Adelaide, that a company called Sundrop Farms, has built an experimental greenhouse which, as Margolis puts it, “holds the seemingly realistic promise of solving the world’s food problems.”

That’s a rather grand claim, to be sure, but the greenhouse in Australia isn’t just some small-scale experiment. It’s already growing tons of tomatoes, pepper and cucumbers—high-quality and pesticide-free—using no fresh water and close to zero fossil fuels: its water comes from the sea and its energy from the sun.

Up next: a 20-acre greenhouse (40 times bigger than the current one) that will produce 2.8 million kg of tomatoes and 1.2 million kg of peppers a year for Australian supermarkets. Projects are also underway in the Middle East.

How does it work? Motorized parabolic mirrors in a 75-metre-long line follow the sun, focusing its heat on a sealed pipe with constantly circulating oil. The hot oil transfers its heat to tanks of seawater pumped from a few metres below ground (the sea is only 100 metres away).

The hot oil heats the seawater to 160 degrees C., and the resulting steam is used to drive turbines, generating electricity. Some of the hot water heats the greenhouses on cold desert nights, while the rest goes into a desalination plant, which produces 10,000 litres of pure, fresh water for the plants. The grower (Dave Pratt, a Canadian from Ontario, described by Margolis as “a hyper-enthusiastic 27-year-old”) can add whatever nutrients are required to the water to make the plants thrive: some of those nutrients come from the salts and minerals extracted from the seawater (the rest is sold to interested third parties).

Driving air, via wind and fans, through water trickling over a wall of honeycombed cardboard evaporative pads keeps the greenhouses humid and cool.

How high-tech is the greenhouse? Pratt can control all the growing conditions via an iPhone app, whether he’s actually at the farm or back home in Canada.

Grown under such controlled conditions, the crops are blemish-free, ideal for supermarkets, and they’re also pesticide-free: although obviously a few pests sneak into the greenhouse, they can be eliminated naturally. As a result, the produce is essentially organic (although it can’t be marketed that way in Australia because the rules prohibit using that term for crops that aren’t grown in soil). For pollination purposes, the greenhouse has its own flight of in-house bees.

As Margolis writes, Sundrop Farms appears “to have pulled off the ultimate something-from-nothing agricultural feat—using the sun to desalinate seawater for irrigation and to heat and cool greenhouses as required, and thence cheaply grow high-quality, pesticide-free vegetables year-round in commercial qualities.”

The new expanded greenhouse, while producing $12 million (Aus.) a year worth of produce, is expected to annually save the equivalent of about 4.6 million barrels of oil and 280 million litres of fresh water compared to a standard greenhouse in a similar location. The potential reduction in energy and water usage worldwide if the technology were adopted in other locations where fresh water is short but sun and seawater are abundant is clearly enormous; and since agriculture currently uses 60 to 80 percent of the planet’s fresh water, enormously beneficial.

Is there a catch? It’s hard to find one. Neil Palmer is the head of Australia’s government-funded desalination research institute. Margolis quotes him as saying, “They are making food without risk, eliminating the problems caused not just by floods, frost, hail, but by lack of water, too, which now becomes a non-issue. Plus, it stacks up economically and it’s infinitely scalable.”

We’re all on a one-way journey into the future. It’s encouraging to remember there are routes we can take to a brighter rather than dimmer future: and those routes, almost always, are blazed for us by science and technology.

Permanent link to this article: https://edwardwillett.com/2012/11/a-solution-to-the-worlds-food-problems/