Writing for an audience 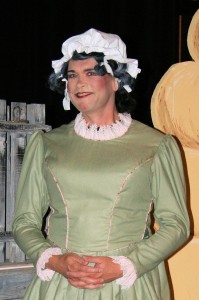 Regular readers of this blog (if such people exist) will know that I act as well as write, and have done since I was 11 years old and in Grade 7 at Weyburn Junior High School, when I was cast in the lead role of Petruchio in a one-act adaptation of Shakespeare’s The Taming of the Shrew.

Perhaps it was because I got to carry a (plastic) sword, and even draw and wave it around at one point, but I was hooked. (No, it wasn’t because I got kissed by a girl, which was not as high on my list of things I wanted to happen at that point as it was a remarkably few number of years later, and it definitely wasn’t because I looked good in tights.)

I continued to act through high school, and also got a taste for musical theatre, playing Bumble in an abbreviated version of Oliver! to kick off that side of my performing life, and since I’ve performed in more plays, musicals, operas (and even one ballet—that’s me as the mother in La fille mal gardée in the photo, which I occasionally threaten to use as an author photo should I ever use a feminine pseudonym) than I can easily tally up, as both an amateur and, for a few years now, as a card-carrying member of Canadian Actors’ Equity.

I’ve also directed quite a few plays and musicals…and all of this, I’ve realized, ties in very nicely with being a writer.

At first glance, the two crafts seem very different. Actors perform in public, writers in private. Actors receive their accolades or brickbats almost at once, in the form of laughter, boos, applause or silent disapproval, either during their performance or immediately upon its conclusion; writers must wait months after the conclusion of their performance before it is even presented to the audience in the form of a published book, and then they may very well hear no response at all beyond, if they are lucky, a review here and there and perhaps someone who comes up to speak to them while they are sitting all alone in a back corner of a bookstore with a stack of books waiting to be signed…

Sorry, got really depressed there for a minute. I’m better now.

Despite the obvious differences, however, I find that my acting craft informs my writing craft, and vice versa. Much of that crossover comes in characterization.

Actors start with the words on the page, which provide a skeleton on which they hang the flesh of a living, breathing person. Writers start with a mental image of a living, breathing person, which they then try to capture in words on a page. But ultimately, the actor ends up living the character he or she is creating, using parts of him or herself and other bits garnered from family, acquaintances and, yes, pure imagination, to create a new persona that has never existed before. The writer does the same thing, and I think that writers who are also actors can draw on the actor version of characterization to help them with the writer version of characterization, so that they are able to put themselves more fully into the skin of their imaginary characters, and better bring those characters to life on the page as the actor brings characters to life on the stage; and I also think that actors who are also writers can draw on their writerly imagination to flesh out the unspoken backstory of the character they portray on stage.

There’s another aspect of stage experience I’ve found useful in my writing, and that’s blocking.

That sounds odd, since if you’re “blocked” as a writer, it’s a bad thing, whereas on stage, “blocking” is a good thing, since it means you’ve moved beyond the sitting-around-a-table-reading-and-discussing-the-script to actually getting the show on its feet.

In the theatre, blocking is the term for roughing out the physical locations and movements of actors in a scene. Actors experience it from the inside; directors experience from the outside, because their task is to ensure that the placement of actors and their movements serve the story and, above all, make it clear to the audience what is going on in a particular scene.

I’ve done a lot of work with beginning writers over the years, and one common problem I see in  their work is a failure to keep a clear mental image, in either their heads or their readers’, of where characters are in a particular scene. For example, a character may be looking into the flames of a fireplace while musing about some horrible occurrence, and then, a few lines later, is staring out the window…but the transition is missing, so that the staring out of the window comes as a shock to the reader, who still has the mental image of the character staring into the fireplace. As far as the reader is concerned, the character just teleported from one place to the other without ever crossing the intervening space.

The effect can be even more pronounced, and more disconcerting, in action scenes, where characters can sometimes seem to be flickering in and out all over a battlefield, for instance, without having followed any clear path for any clear reason.

I think I generally avoid that pitfall in my own writing—I’ve been told I write particularly good action scenes (he said modestly)—and I’ve often thought that my acting and directing experience is one reason for that. You could say there’s a little stage in my head (a theatre in the round, not one with a proscenium: that would be weird) on which my characters move, and I am always aware of where they are on it, with whom they are interacting, and the necessity to move them from point A to point B in a fashion that both makes sense for the character and precludes them tripping over the furniture.

I am also aware of what, in the theatre, you would call the audience sightlines. Can the audience see what it’s supposed to see as the characters move around the stage of my imaginary world? Just as important, are they precluded from seeing the things I don’t want them to see, the sweaty guys running around backstage moving sets and the actors frantically changing costumes in the wings?

Because whether I’m acting, directing, or writing, what I’m really doing is creating an illusion of real life, not real life itself. Ultimately, both as an actor and as a writer, I’m in service to something greater than myself: a story. If I do my job well, the audience member/reader will accept that illusion. They’ll see my cobbled-together character as a living, breathing, believable person, they’ll accept what happens within each scene of the story as believable and even find it entertaining (funny, sad, exciting, anything but boring). They will willingly suspend their disbelief at the more fantastical elements of what happens on stage or page because I have successfully directed their attention at what I want them to watch, and presented it clearly, and just as successfully hidden from them that which I don’t want them to see until such time as I want them to see it.

If I may do some violence to the words of Shakespeare (who, having had so much violence done to his work over the centuries, no doubt has long since given up on rolling over in his grave as a waste of post-mortal energy):

Every books’s a stage,
And all the characters in’t merely players:
They have their exits and their entrances;
And the writer at his keys directs their parts…

Permanent link to this article: https://edwardwillett.com/2012/11/every-books-a-stage-and-all-i-really-want-to-do-is-direct/