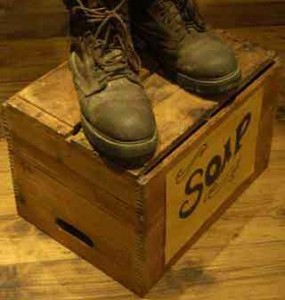 The great thing about the Internet is the way you can find out way more information than you ever used to about your favorite authors, actors, singers, etc.

Because here’s the thing: most people don’t agree with you.

Oh, don’t feel bad, they don’t agree with me, either.

Used to be, even when I was a kid, you just didn’t know much about what your favorite authors and performers thought. You might see an interview here or there, but quite likely you would read books and watch movies without an inkling of this writer’s or that actor’s take on, say, taxation levels or foreign policy. All you knew was you really loved their books, or you really loved their movies, and really, that was enough.

Now, everyone seems to feel entirely free to splatter their “thoughts” (and yes, often enough the scare quotes are appropriate) about politics, religion, and their own sense of pure enlightenment all over the World Wide Web, either through their own blog or through the endless series of interviews and profiles that clutter up the Internet.

Of course they have the right: free speech and all that, and personally I put that right above all others. But just once in a while, I’d like to see a little modesty creep in. A little sense that maybe, just maybe, the other side of whatever topic is being proclaimed about might have a few points to make, too.

Because here’s the other thing. The default tone for discussion on the Internet is snark. You don’t have to engage with the arguments against your position, you just have to trot out a few well-worn phrases like “wingnuts” and “sheeple,” “libtards” and “Rethuglican,” call someone racist or socialist or fascist or some other word ending in “-ist,” and you’re done! You’ve established your bona fides as a political thinker, and all your readers (if you’re a writer) who agree with you will clap their hands in delight.

But that default snarkiness has another effect. Remember, at least half of your potential readers don’t agree with yout. It means that, for any big, divisive topic, you are alienating half of the population: and not because they disagree with your ideas, per se, but because they disagree with the way in which you present those ideas. The only reason to use an insulting tone is to insult people, and guess what? You’ve succeeded. You’ve either insulted half your audience or you’ve insulted some of their friends and family members. And the next time they see your name on a book, they’re going to remember that insult, and remember that you hold them in contempt…and quite likely they’re going to return that favor.

Of course we’ve all enjoyed books and music and movies made by people whose opinions and, often, lifestyle choices we disagree with. But pre-Internet, you could more easily overlook all that stuff because it wasn’t in your face all the time.

These days, it’s harder. And too many writers, people you would expect to be able to present a reasoned argument that accurately reflects the opposing position but presents logical reasons why it is incorrect, go straight for bombast and insult.

It’s not even the fact they disagree and insult me and friends and family who share my opinion of a particular topic that annoys me most—it’s the fact that they’ve let me down by proving themselves to be people of no particular insight, who cling to a point of view not because they have considered both sides of the issue and then made a reasoned choice, but simply because it makes them part of the political tribe they either grew up in are associated themselves with somewhere along the line.

So, will you see political rants on this blog? It’s not impossible—I have strong opinions about things, too—but I will promise this: if I decide to take on a controversial topic, I will do my best to present the other side of the argument fairly, and then explain why I chose the opposite side, and I will do my best to do so without insulting anyone.

Well, unless I’m writing about something we can all agree to hate, like boiled okra. Then the gloves are off.

Permanent link to this article: https://edwardwillett.com/2012/11/my-favorite-author-thinks-im-stupid-the-perils-of-internet-pontificatation/