A Christmas greeting from me to you!

A Christmas tradition: ‘Twas the Nocturnal Time of the Preceding Day to the Day We Call Christmas 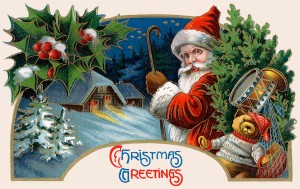 There’s a great song called “Christmas Cliches” in which the singer expresses a love of all the Christmas things that come ’round year after year, from plywood reindeer on the roof to Johnny Mathis on the radio. One of the reasons we love Christmas (those of us who do, and you can certainly count me among that number) is that warm sense of tradition, of things that, despite all the changes in the world from year to year, you can count on remaining constant. It’s an island of stability in a tossing sea of chaos, to coin an overblown metaphor.

So here’s a Willett Christmas tradition. Originally written for CBC Saskatchewan’s Afternoon Edition radio program, and first read at one of their Christmas open houses (a different one from the one at which I sang “Let it Snow! Let it Snow! Let it Snow!“), it’s been published or posted a few times since. Last year it got a lot of attention because it was noted by Ed Yong at Discover Magazine‘s website.

It’s not exactly A Charlie Brown Christmas, but I hope you enjoy it, whether for the first time…or the third or fourth.

By Edward Willett, with apologies to Clement Clarke Moore

’Twas the nocturnal time of the preceding day
To the day we call Christmas (which is, by the way,
Just a modern twist on the eons-old fight
To use feast and fire to end winter’s night).
And all through our dwelling (a.k.a. the house),
Not a creature was stirring, not even a mouse.
(Mus musculus—really a terrible pest,
But even a pest needs a bit of a rest.)
The stockings were hung by the chimney with care,
In hopes that Saint Nicholas soon would be there
(Though that old-fashioned chimney’s so energy-poor
That next year I’m making him use the front door!).
Our genetic descendants lay snug in their beds,
While sucrose-based snack foods danced jigs in their heads,
And mamma in her kerchief, and I in my cap,
Had just settled our brains for a long winter’s nap
(You wear hats to bed when you lack central heat;
It helps keep you warm from your head to your feet),
When out on the lawn there arose such a clatter,
I sprang from my bed to see what was the matter.
(I’m not really jumpy, but a noise in the night
Sets off animal instincts to flee or to fight.)
Away to the window I flew like a flash,
Tore open the shutters and threw up the sash
(Well, not really flew, it was more like a dash—
And my wife didn’t wake even after the crash).
The moon on the breast of the new-fallen snow
Gave a luster of midday to objects below
(Which makes sense, since the moon gets its glow from the sun,
Which means moonlight and sunlight in one sense are one!);
When what to my wondering eyes should appear,
But a miniature sleigh and eight tiny reindeer
(Rangifer tarandus, you could call them, too—
Here in Canada we know them as caribou).
With a little old driver, so lively and quick,
I knew in a moment he must be St. Nick.
(St. Nick is the patron of Russia, you know;
He was born fifteen hundred or more years ago!)
More rapid than eagles his coursers they came
(As fast as a peregrine diving on game),
And since his old sleigh had no window or door,
He shouted their names o’er the slipstream’s loud roar:
“Now, Dasher! now, Dancer! now, Prancer and Vixen!
On, Comet! on, Cupid! on, Donder and Blitzen!”
(An interesting mixture of names old and new—
Astronomy-biology-mythology stew!)
“To the top of the porch, to the top of the wall!
Now dash away, dash away, dash away all!”
As dry leaves that before the wild hurricane fly,
When they meet with an obstacle, mount to the sky
(That’s ’cause air piles up when it meets with a wall,
And the leaves, weighing little, rise too, and don’t fall),
So up to the house-top the coursers they flew,
With the sleigh full of toys—and St. Nicholas too.
And then in a twinkling I heard on the roof
The prancing and pawing of each little hoof
(Not to mention the cracking of each little shingle:
Reindeer weigh quite a lot, as does dear Mr. Kringle!).
As I drew in my head, and was turning around,
Down the chimney St. Nicholas came with a bound.
(I can only assume, since his legs didn’t crack,
That friction ’twixt him and the bricks held him back.)
He was dressed all in fur from his head to his foot,
And his clothes were all tarnished with ashes and soot
(And since so much creosote blackened his hide,
I no longer fear carbon mono-oxide);
A bundle of toys he had flung on his back,
And he looked like a pedlar just opening his pack.
His eyes, how they twinkled (reflecting the light)!
His dimples, how merry (one to left, one to right)!
His cheeks were like roses, his nose like a cherry
(I thought for a sec he’d been drinking my sherry);
His droll little mouth was drawn up like a bow,
And the beard on his chin was as white as the snow.
(And did you know that white hair is not really white?
It looks white because it’s transparent to light.)
The stump of a pipe he held tight in his teeth,
And the smoke it encircled his head like a wreath.
(We must forgive Santa this unhealthy sin;
He was born before all of the studies were in.)
He had a broad face and a little round belly
That shook, when he laughed, like a bowl full of jelly.
(It’s amazing, you know, that he’s lived for so long,
What with all of the things that he eats that are wrong!)
He was chubby and plump, a right jolly old elf,
And I laughed, when I saw him, in spite of myself.
(Laughter benefits heart, lungs and brain, it’s been said;
Maybe laughter’s why cheerful old Santa’s not dead!)
A wink of his eye and a twist of his head
Soon gave me to know I had nothing to dread.
(Body language, to Santa, is nothing unique;
He speaks every language, from Zulu to Greek.)
He spoke not a word, but went straight to his work,
And filled all the stockings; then turned with a jerk,
And laying his finger aside of his nose,
And giving a nod, up the chimney he rose.
(Apparently Nick spends his off-season time
At a school in Nepal, where he’s learned how to climb.)
He sprang to his sleigh, to his team gave a whistle,
And away they all flew like the down of a thistle
(Its surface is large, but it’s so very light,
That the slightest of breezes can make it take flight);
But I heard him exclaim, as he vanished away,
With his anti-grav reindeer and miniature sleigh,
“Though I may not be real, in the physical sense,
“Though I may not have mass, and I may not be dense,
“Though it’s true, scientifically, this isn’t right,
Happy Christmas to all, and to all a good-night!”

Permanent link to this article: https://edwardwillett.com/2012/12/a-christmas-tradition-twas-the-nocturnal-time-of-the-preceding-day-to-the-day-we-call-christmas/