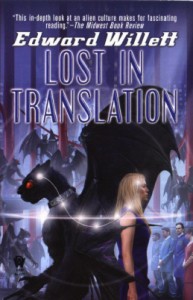 Here is a tale I’ve told oft before, though never (I think) in print or pixel: the tale of how I became a DAW author.

It’s an oft-told tale because I like to share it with writers who are still in that seeking-publication stage, for though the specifics of it are of little use (I doubt any other writer has taken or will take my particular route to a New York publisher), there are some details of it that are, I hope, both helpful and encouraging.

Here’s how it transpired…

As the new millennium dawned, I had written quite a lot of non-fiction, but only five novels had appeared bearing my name.

Two (Soulworm and The Dark Unicorn) had been published by Royal Fireworks Press, and the less said about that the better: suffice it to say I made the mistake far too many beginning writers make and signed a bad contract with a publisher I should never have gone near.

One, Andy Nebula: Interstellar Rock Star, had been published by Roussan, a small-but-respectable publisher in Montreal that fairly soon thereafter went out of business. (Not my fault—honest!)

One, Spirit Singer, was my boy-was-I-ahead-of-the-curve print-on-demand-and-ebook offering, brought out under the auspices of Awe-Struck E-Books, which called itself Earthling Press for POD purposes (not to be confused with Earthling Publications, a respected American small press specializing in fine limited editions of horror, dark fantasy and suspense).

And then there was Lost in Translation.

Lost in Translation was my first adult science fiction novel, and had, without success, made the rounds to all the big SF publishers (including DAW) under the auspices of an agent I had for a while but who promptly dropped me when that book didn’t sell. (Not exactly committed to building her writers’ careers…)

But then I heard of Five Star Books. Five Star publishes lines of books which are marketed primarily to libraries: libraries set up a standing order with Five Star and receive, say, three mysteries a month, selected by Five Star’s editors. The books have library bindings—they’re tough hardcovers with the cover image printed right into the cover, as opposed to on a slipcover.

Although I believe it is now gone, at the time Five Star had a science fiction line, packaged by Tekno Books, which was run by the late Martin H. Greenberg, a well-known editorial name in the science fiction field. John Helfers edited for Tekno, and it was Helfers who gave me the good news that Tekno would take Lost in Translation for publication through Five Star.

Yay! Although, Five Star’s model being what it was, the book was impossible to find in bookstores, had an…unfortunate…cover, and was pretty much ignored by reviewers and the like.

But here’s where it gets interesting…

Mr. Greenberg comes on the line. He informs me, with great pleasure, that DAW has decided to bring out Lost in Translation as a mass-market paperback.

As I understood it from what he told me, DAW had a “hole” in its publishing schedule it needed to fill, so it turned to him (he did a lot of work with DAW over the years, primarily as an editor of anthologies), asking to see some of the books he had published through Tekno. Among the books he sent them was mine, and mine was the one they chose to plug that “hole.”

That was (he says with vast understatement) a very exciting morning. I was tickled pink, even though I had yet to meet or even be in direct contact with anyone at DAW. One reason: the old DAW paperbacks with yellow spines had always, in a way, meant science fiction to me (that, and the little stickers of a rocket in front of a stylized atom that the local library stuck on the back of SF titles so they could be easily identified on the shelves), simply because they were so instantly identifiable.

There was also the interesting fact that the letters DAW, which of course stand for Donald A. Wollheim, are also the initials of my five-years-older brother, Dwight Arthur Willett, whose own SF-reading habit had so much to do with the fact I also read (and eventually wrote) the stuff.

(An aside: there is also an ECW Press, here in Canada, which has my initials—and which is also, these days, publishing some science fiction. If I were inclined to see things karmically as opposed to comically, I might see that as a sign of some sort. Although I suppose to round things out, since I’m being published by DAW, my brother should write a book to be published by ECW…)

By contrast, Ethan Ellenberg had me email him a chunk of the manuscript—and got back to me almost once saying he’d represent me.

And so, within the space of about a week, I was a DAW author and had a well-known New York agent…

…and the way I did it is of absolutely no use to anyone else, you might think, so why do I tell this tale often to wannabe writers?

Because, I firmly believe, buried within it is, if you squint just right, a ray of hope for other writers seeking publication.

I’ve asked both Betsy Wollheim and Sheila Gilbert how many manuscripts DAW sees, and the number is in the low hundreds. Every month.

And yet…they had a “hole” in their publishing schedule they needed Lost in Translation to fill. Out of all those manuscripts, they had nothing with which to fill that hole.

So what I tell beginning writers is that, yes, the odds are against you—but this isn’t a lottery. Most of the manuscripts DAW or any other publisher sees are unpublishable: either completely unsuitable, or just plain bad.

That means that if you’re good—heck, if you’re even competent—and if you’re writing the kind of thing the publisher to which you are submitting actually publishes, then you’re already way ahead of the bulk of the manuscripts that show up on DAW’s, or anyone else’s doorstep.

Permanent link to this article: https://edwardwillett.com/2012/12/how-i-became-a-daw-author/