First book from writers I advised as writer-in-residence is released! 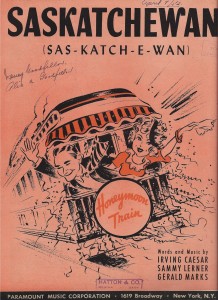 So, I’m writing this play. Its working title is The Piano Bench: A Love Story with Music and Ghosts. If all goes well it might even make it on stage late next year.

The house in which I live has been in my wife’s family since 1939. (It was built in 1926,) Her grandparents, Sam and Nancy Goodfellow, were patrons of the arts in Regina, probably more due to Nancy’s influence than Sam’s. (It was Sam’s First World War memoirs I posted recently.) Nancy, who was born in England, by all accounts was a wonderful singer and perhaps could have had a professional career had she pursued it. She didn’t, but she never lost her love for music, and as a result, among the many interesting things in this old house are stacks of sheet music from the 1930s and ‘40s, much of which was tucked away in the piano bench of the soon-to-be 100-year-old grand piano in our living room.

A few years ago I did several spots on CBC Saskatchewan’s Afternoon Edition radio show on “Things I Found in My Mother-in-Law’s House,” in which I researched various fascinating artifacts found here. We did make mention of the music in the course of talking about the piano, and in fact Colin Grewar, the host, and I made a little music together, with a rendition of “When There’s a Breeze on Lake Louise.”

I’d still like to do a coffee table, lots-of-photos book of Things I Found in My Mother-in-Law’s House (any publishers interested, drop me an email!) but I found myself particularly intrigued with the music…and that’s where this play came from.

The Piano Bench isn’t autobiographical, but the main character (a nightclub singer in search of new material) does end up moving into an old house with a piano bench full of music…but also with ghosts. Not scary ghosts, but sad, romantic ghosts, whose tale of a love affair gone astray plays out in parallel with events in the present day. There’s only one set, the living room of the house, with the piano—and its bench—at its centre, and along the way there’s a lot of music—all of it music found in the piano bench of my own house.

The list of music is long, and covers everything from the well-known to the deservedly obscure to the unfairly forgotten to the novelty hits like…well, like the one whose image graces this post.

“Saskatchewan” (helpfully broken down to Sask-Katch-E-Wan, you’ll note, for those unsure as to how to pronounce it…and really, they still got it wrong: up here, we mostly say, “S’katchwan,” two syllables, tops) featured words and music by Irving Caesar, Sammy Lerner (who, among other things, wrote the theme song for Popeye—in less than two hours!), and Gerald Marks. I can’t prove it, but I think I can safely say none of them had ever been in Saskatchewan, since the song is all about downhill skiing and includes the line, “We might have been in the Alps.” I love my province, but although we do boast the highest point between the Rockies and the Laurentians (the Cypress Hills), even those you would have to really work at to mistake for the Alps.

I’m almost sure this song will have a place in my play, about which I will keep you posted, especially if/as it moves toward production.

But in case it doesn’t, I leave you with the timeless lyrics of “Saskatchewan,” which, you will immediately see, is not the easiest thing in the world to rhyme, without doing serious grammatical damage. Still, a valiant attempt!

Swift as the breeze was the race on the skiis I would bet you on
in Saskatoon, Saskatchewan;
I’d walk ahead while you rode on the sled that I’d fetch you on,
in Saskatchewan;

We might have been in the Alps,
Just like you seen in the papers,
Risking a couple of scalps,
And cutting Canadian Capers;

And tho, it’s ten below, when you’re in love,
you feel as tho it’s ninety-eight above
and so, away you go,
across a Paradise of ice and snow, Oh!

Permanent link to this article: https://edwardwillett.com/2012/12/im-writing-a-play-and-using-this-song/