To mark the first day of winter…

A Christmas tradition: ‘Twas the Nocturnal Time of the Preceding Day to the Day We Call Christmas

A project I’ve had in the back of my mind for years is a book called Things I Found in My Mother-in-Law’s House, built around the many interesting mid-century knick-knacks, oddments, thingamobs and whatchamallits in this house where my wife’s family has lived since 1939 and which is now my home.

I did do a series of CBC radio spots on it a few years back, and several blog posts, but it has never coalesced into a book.

But, whether it becomes a book or not, I can at least continue to post Things I Found in My Mother-in-Law’s House on this blog, and that’s going to be my goal for your Sunday entertainment going forward.

Of course, today is not only Sunday, it’s just two days before Christmas, and there are one or two other demands on my time today, so this is more of a teaser: next week, I’ll be back with a longer blog built around one of the old children’s books in the basement, specifically the Child’s Own Annual, from (I’m pretty sure) 1930.

Today, just a couple of images. Next week: old ads. And after that…who knows? I’ll poke around and see what I can find, and what I can research. 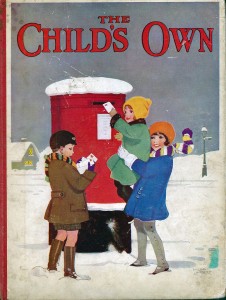 Quite lovely, though I’ve never understood why the English forced their boys to wear shorts in the snow. (The pictures in Winter Holiday by Arthur Ransome, a favorite book of mine as a kid, showed the same thing.)

And then, the rather alarming back cover: 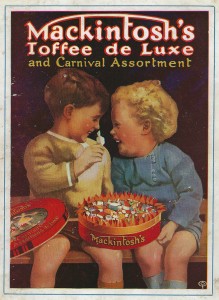 I confess I see these as demon children cackling as they devour the gaily wrapped souls of the damned (note the flames of hell licking around the container). But that’s probably just me.

Permanent link to this article: https://edwardwillett.com/2012/12/retro-sunday-ads-from-a-1930-childrens-annual/