The next big thing

First book from writers I advised as writer-in-residence is released!

The birth of The Hobbit 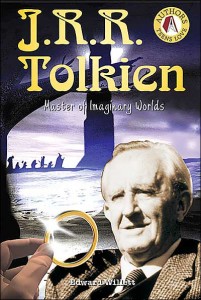 I posted this back in July, but it seems apropos to post it again today, with the release of the first movie in the new trilogy based on J.R.R. Tolkien’s book The Hobbit. It’s the first chapter of the biography of Tolkien I wrote for Enslow Publishers, entitled J.R.R. Tolkien, Master of Imaginary Worlds..and it’s all about how The Hobbit came to be written and published. Happy Hobbit Day!

Chapter 1: In A Hole in the Ground Lived A Hobbit

The world might never have heard of J.R.R. Tolkien, or The Lord of the Rings, if not for two young people. One was an anonymous student. The other was the son of an English publisher.

This wasn’t part of Tolkien’s duties as Professor of Anglo-Saxon at the University of Oxford. It was really a summer job, a way to bring in a little extra money between school terms. [ii] It was also terribly boring. In a letter to W.H. Auden years later, Tolkien wrote of “the everlasting weariness of that annual task forced on impecunious (poor) academics with children.”[iii]

But then he turned over one page to find, “One of the candidates had mercifully left one of the pages with no writing on it (which is the best thing that can possibly happen to an examiner) and I wrote on it: ‘In a hole in the ground there lived a hobbit.'”[iv]

That single, simple sentence was like a seed that eventually sprouted into The Hobbit. From The Hobbit, years later, grew The Lord of the Rings.

“Names always generate a story in my mind,” Tolkien said. “Eventually I thought I’d better find out what hobbits were like.”[v]

Tolkien’s first attempt to turn his single sentence into a complete novel didn’t get past the first chapter. He put the manuscript aside for years, then began again. He read chapters to his children after tea on winter evenings. But he still didn’t finish the story.[vi] In fact, he abandoned it shortly after the death of the dragon Smaug, late in the book. He’d occasionally show the manuscript to friends like C.S. Lewis (author of The Chronicles of Narnia), but mostly it sat in his study, unfinished and likely to remain so.[vii]

But one of the people who did see it was an Oxford graduate named Elaine Griffiths. On Tolkien’s recommendation, Griffiths, a former student of his, had been hired by the London publishers George Allen & Unwin. In 1936 Griffiths mentioned to a friend of hers, Susan Dagnall, a member of the publisher’s staff, that Tolkien had a wonderful unfinished children’s story. Dagnall asked Tolkien for a copy, and took it back to London. She liked it, and asked Tolkien to finish it. He took up the story again, and in October sent the completed manuscript to George Allan & Unwin.

Stanley Unwin, chairman of George Allen & Unwin, thought that the best judges of children’s literature were children themselves, so he gave the manuscript to his son Rayner, age 11.[viii] Rayner read it and wrote a short review of it for his father, who paid him one shilling for his work. Rayner liked the book, so his father published it in the fall of 1937.

Here’s the report (complete with the original spelling) that Rayner Unwin wrote about The Hobbit for his father, Stanley Unwin:

“Bilbo Baggins was a hobbit who lived in his hobbit-hole and never went for adventures, at last Gandalf the wizard and his dwarves perswaded him to go. He had a very exciting time fighting goblins and wargs, at last they got to the lonley mountain; Smaug, the dragon who gawreds it is killed and after a terrific battle with the goblins he returned home–rich! This book, with the help of maps, does not need any illustrations it is good and should appeal to all children between the ages of 5 and 9.”[ix]

Rayner said years later, “I earned that shilling. I wouldn’t say my report was the best critique of The Hobbit that has been written, but it was good enough to ensure that it was published.”[x]

The publishers received a lot more than one shilling as a result of trusting Rayner’s opinion. Critics loved The Hobbit. The London Times reviewer wrote, “All who love that kind of children’s book which can be read and re-read by adults should note that a new star has appeared in this constellation.”[xi]

The London Observer called it “…an exciting epic of travel, magical adventures…”. W.H. Auden called it “the best children’s story written in the last fifty years.” And when Houghton Mifflin published it in the United States in 1938, it won the New York Herald Tribune prize as the best children’s book of the year.[xii]

The first edition of The Hobbit sold out by Christmas. A reprint was hurriedly prepared, this time containing some of Tolkien’s own colored illustrations.[xiii] Since then, The Hobbit has stayed in print continuously, and has sold more than 40 million copies.[xiv]

The initial sales and acclaim for The Hobbit were such that just a few weeks after it was published Stanley Unwin invited Tolkien to London to talk about a possible sequel. Tolkien submitted a number of manuscripts he had on hand, including The Silmarillion, Farmer Giles of Ham and Roverandom, but they weren’t what Unwin had in mind. He knew that the first book about hobbits had sold really well, so he wanted another book about hobbits.

Tolkien wasn’t sure he had any more stories to tell about hobbits, but he gave it some thought. On December 19, 1937, he wrote to Charles Furth, who was on the staff at Allen & Unwin, “I have written the first chapter of a new story about Hobbits–‘A long-expected party.’ A merry Christmas.”[xv]

We don’t know if Charles Furth had a merry Christmas that year or not, but many readers since then have, because ‘A long-expected party’ was the first chapter of The Lord of the Rings.

Tolkien’s “new story about Hobbits” would eventually become his masterpiece–and one of the most beloved books of the 20th century.

Permanent link to this article: https://edwardwillett.com/2012/12/the-birth-of-the-hobbit/