The birth of The Hobbit

The next big thing 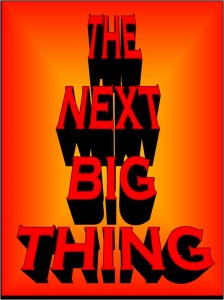 I don’t very often follow up on things I’ve been “tagged” with in the online world, but I was tagged twice for “The Next Big Thing,” both times by writers from Australia, and that seems somehow karmically important. So…

The way this is supposed to work is that if you get tagged you answer10 questions, post the result on your blog, along with links back to those who tagged you (Adrian Bedford and Laura Goodin, in this case), and then you’re supposed to tag five more people. Supposedly you’re supposed to obtain the agreement of five more writers to participate before you post your answers, but did I mention I don’t usually do the tagging thing? Works both ways. I tag not, neither am I tagged.

So I may or may not get five more writers to take part. If I do, I’ll post them down below. If I don’t…oh, well.

Forthwith, then, the questions:

1. What is the [working] title of your next book?

Masks, the first book in a trilogy which will continue with Faces, and conclude with Shadows. They’ll appear under the pseudonym E.C. Blake.

2. Where did the idea come from for the book?

The primary inspiration was nothing more exciting than some masks we happen to have lying around the house from some masquerade party or other. I started looking at them and wondering what it would be like to have a society where everyone went masked…and why.

Oh, and the first two titles, Masks and Faces? Totally the name of the Regina Little Theatre newsletter.

3. What genre does your book fall under?

4. What actors would you choose to play the part of your characters in a movie rendition?

Actually, I’d choose new, young actors nobody had ever heard of, since all of the main characters are kids.  Besides, new actors need the work more than established actors.

5. What is the one-sentence synopsis of your book?

A young girl in an authoritarian society where control is exerted through magical Masks discovers she has far more power than she realizes—power that holds both the promise of freedom and the threat of complete destruction.

6. Will your book be self-published or represented by an agency?

I’m represented by Ethan Ellenberg, and the book will be published in hardcover by DAW Books next fall.

7. How long did it take you to write the first draft of the manuscript?

Two or three months. I wrote the 100,000-word first draft of the second book in the series in one month flat. That’s the fastest I’ve ever written anything, although I did do 50,000 words in a week once when I was at the Banff Centre and working on my previous DAW novel, Magebane (written as Lee Arthur Chane). If I’d kept that up I could have written two 100,000-word novels in a month, but steam would have been coming out of my ears and I might have been reduced to blubbering.

8. What other books would you compare this story to within your genre?

Stories of young people who discover they have special abilities are not exactly rare in fantasy, so there are lots it could be compared to. I’d prefer not to make those comparisons, though, for fear I send people to those other books instead of mine. The one book, although it’s very different, I would mention is Justine Larbalestier’s Magic or Madness trilogy about the girl named Reason, because her system of magic offers power but also great risks for those who use it. There’s something similar going on in my book. Mara, my main character, has the potential to be save the whole kingdom from tyranny…but also the potential to become the greatest monster the kingdom has ever seen.

9. Who or what inspired you to write this book?

I supposed my agent did. He said, “We need a new project to present to DAW. Send me some ideas.” So I came up with ten. He liked this one. So did I. So did DAW.

Or to put it another way, I don’t rely on inspiration.  Otherwise I’d never get anything done.

Or to put it yet another way, my inspiration was the need to keep my writing career going!

10. What else about the book might pique the reader’s interest?

It’s got magic, intrigue, brutality, slave labor, darkness, light, beauty, terror, humor and, I hope, a main character people will enjoy reading about as much as I enjoyed writing her. What’s not to like?

Permanent link to this article: https://edwardwillett.com/2012/12/the-next-big-thing/