Things my editor told me 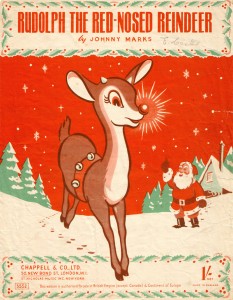 Long-time readers of my column will be aware of how closely I like to keep tabs on aerotarandusdynamics, the shamefully under-studied science of flying reindeer.

I am pleased to note that there has been a small but significant development in aerotarandusdynamics research this year, but before I get to that, perhaps I should recap some of what I’ve written before on the topic, just to refresh your memory.

How do reindeer fly? That, of course, is the central question of aerotarandusdynamics.

For any object to fly, it must overcome gravity with lift. Airplane wings are designed so that the air passing over them must travel further, and therefore faster, than the air passing beneath them.  Fast-moving air exerts less pressure than slow-moving air, so the wings–and with them, the airplane–are forced upward.

A large male reindeer such as, say, “Dasher,” stands 1.2 metres at the shoulder and can weigh 115 kilograms. (All flying reindeer have names, for there are only nine of them in the world, making them extremely endangered, and they are all in captivity, working animals in the service of a corpulent recluse who lives in the Far North.)

How can such a large animal generate enough lift to fly?  Well, both male and female reindeer have long, slender antlers with branching points that are “palmate”—broad and rather flat, like the palm of a hand. The Standard Theory among aerotarandusdynamicists is that in flying reindeer, these palmate points have become exquisitely effective lifting bodies. When the reindeer make high, bounding leaps, the air rushes over their antlers, creating enough lift to send them soaring.  Once airborne, they use their broad feet to “row” through the air.

The Standard Theory has its detractors, of course.  More recently, the Gasbag Theory has gained traction in the field’s leading journal, Popular Aerotarandusynamics. Gasbaggers note that, like other herbivores, reindeer generate large quantities of lighter-than-air methane in their digestive tracts, and theorize that creatures’ weight could be partially offset if this gas, rather than being expelled, were instead stored inside a specialized, flexible internal bladder. Alas, the existence of such an organ must remain speculative until a specimen can be dissected.

Supporters the Gasbag Theory also feel that this methane might provide the fuel for a form of rocket propulsion that could help explain the reindeer’s remarkable speed…but again, more work is needed.

I do not know which of these theories the researchers in the Netherlands and Norway who have just published a new paper on the science of flying reindeer in the Christmas issue of BMJ.com subscribe, but their work, though not addressing this central question, is still a valuable addition to this still-fledgling field of study.

They chose to study the bright red nose of the leader of the flying reindeer herd, the quaintly named Rudolph. Previous researchers have suggested that this nose might be a secondary sexual characteristic, like the red breasts of male robins, with perhaps the same attracting-a-mate function, but not so, according to these researchers.

They say that Rudolph’s nose is red because “it is richly supplied with red blood cells which help to protect it from freezing and to regulate brain temperature,” essential for flying under the extreme temperatures often encountered during the reindeer’s annual trans-global flight on Christmas Eve in the service of their mysterious owner, who styles himself “Santa Claus.”

Micro-vessels in the in the nose are vital for delivering oxygen, controlling inflammation, and regulating temperature, the scientists note, so they set out to see if perhaps Rudolph’s nose had more of these than human noses.

With a hand-held video microscope, they studied the noses of five healthy humans, and found a circulating blood vessel density of 15 millimetres of blood vessels per square millimeter of nasal tissue.  Then they looked at the noses of two reindeer—just ordinary ones, not flying ones—they found a 25-percent higher density,  carrying a super-rich concentration of red blood cells.

The reindeer noses also had a higher density of mucous glands, which the researchers say help “maintain an optimal nasal climate during changing weather conditions and extremes of temperature as well as being responsible for fluid transport and acting as a barrier.”

Clearly, Rudolph’s nose is not a mating display at all, but an exquisitely adapted organ that has earned him his spot at the head of the herd because he is best suited to facing the icy winds to which the leader is exposed more than any other of the animals.

One might note, though the authors of the article did not, that Santa Claus’s nose is generally portrayed as red as well: perhaps, he, too, has a unique adaptation in this area.

I find it extremely encouraging that at last there is new research into aerotarandusdynamics, or at least a related topic. Perhaps more students will now choose to specialize in this challenging, chilly, but ultimately rewarding field of study.

Permanent link to this article: https://edwardwillett.com/2012/12/the-science-of-rudolphs-red-nose/